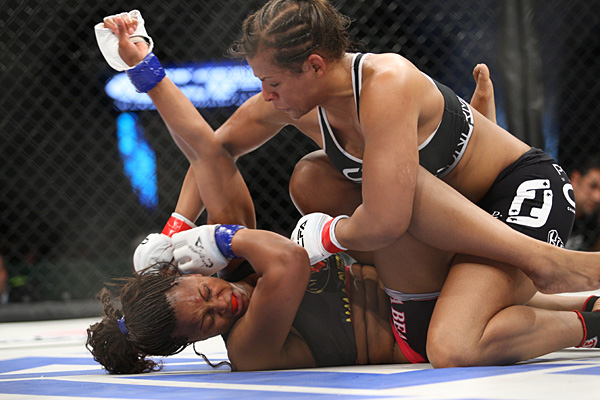 
Transgender fighter Fallon Fox improved her professional record to a perfect 3-0, as she submitted Allanna Jones with a third-round shin choke and advanced to the Championship Fighting Alliance women’s featherweight tournament at CFA 11 on Friday at the BankUnited Center in Coral Gables, Fla. Jones tapped out 3:36 into round three.

Fox proved to be the aggressor early in the contest, continually moving forward and firing off leg kicks and right hands. Jones held her own, however, as she backpedaled and tried to counter with jabs to the midsection and left hooks upstairs. Fox took the fight to the floor in all three rounds, working with punches and elbows from the guard before shucking off an armbar attempt in the final stanza and passing to side control. From there, “The Queen of Swords” applied the finishing hold, cutting off Jones’ blood supply on one side with a north-south headlock while pinching the other artery with her shin bone. 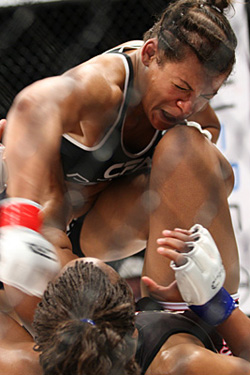 K. Mills
Fox started slow but finished Jones.
Fox advances to the final of the women’s featherweight tournament, where she will face Ashlee Evans-Smith for a shot at $20,000.

“I noticed [Jones] just tried to get away from me a lot. It was hard to catch up to her, but I did in the end, so that was pretty awesome,” Fox said. “It’s going to be an awesome match. Ashlee Smith is actually a little bit bigger than me. It’s going to be a hard challenge, but we’re going to rock and win this $20,000.”

Mike Kyle left no room for controversy in the main event, knocking out Travis Wiuff just 21 seconds into their heavyweight rematch.

Kyle and Wiuff previously met more than two years ago under the King of the Cage banner, with “MAK” initially earning a technical knockout win.

However, that result was later changed to a no contest once it was determined that Kyle had struck Wiuff after the bell to end round two.

The CFA 11 headliner would last just a fraction as long as that bout, as Kyle quickly clipped Wiuff with a wide left hook behind the ear that disrupted the Bellator MMA veteran’s equilibrium and dropped him to the floor. Kyle hesitated to pounce on his foe, first looking to referee James Warring to stop the contest. When Warring allowed the fight to continue, Kyle dropped a pair of coffin-nail hammerfists on his prone opponent, causing him to briefly go limp before clutching his head in pain. Wiuff remained on his back for several minutes before eventually being helped to his stool and then standing under his own power to congratulate Kyle. 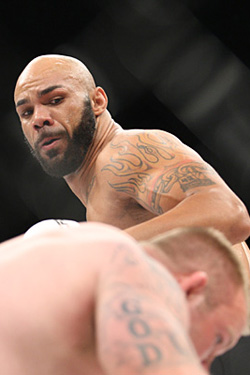 K. Mills
Kyle melted Wiuff with leather.
“Those are the shots that nobody ever expects. One shot behind the ear -- it doesn’t take much. Look at [Junior] dos Santos and Cain [Velasquez] in their first match. Same type of shot,” Kyle said. “I [was] trying to tell the ref that [Wiuff] was done. I saw his eyes roll back. The ref did what he could to let him defend himself, but I really don’t want to hurt [anyone] out here.”

Ex-Bellator talent Luis Palomino violently knocked out Robert Washington just 3:26 into their lightweight showdown. Though the bout’s opening minutes provided little in the way of action, “Baboon” soon electrified the crowd with a lunging one-two, the second half of which snapped Washington’s head around and sent him crashing to the canvas. Palomino nearly followed up on his badly dazed foe but thought better of it, instead raising his hands high as referee Troy Waugh waved off the contest to save Washington from further punishment.

Sean Soriano retained his interim featherweight championship in workmanlike fashion, taking a unanimous verdict from Elvin Leon Brito with scores of 50-45 across the board.

The undefeated 23-year-old came out aggressive from the get-go, popping Brito with combinations and planting him on the canvas often. The fight became a bloodbath in the third period, where Soriano used a knee to break Brito’s nose -- an injury that would spew blood for the remainder of the contest as Brito did his best to slow down his relentless foe from the guard. 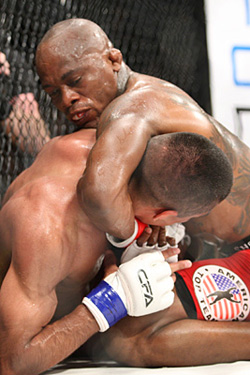 K. Mills
Vila returned to his wrestling roots.
Bellator veteran Alexis Vila returned to his winning ways in a flyweight showdown with Czar Sklavos, though the 1996 Olympic wrestling bronze medalist found himself in trouble early after Sklavos clipped him with a sweet counter left hook. Vila recovered from the blow, however, and floored his man with a leaping left of his own late in round one. The second stanza would bring much of the same, as Vila staggered Sklavos with a pair of hard rights and later took the fight to the floor in both rounds two and three en route to a unanimous decision victory.

In the main card opener, Ed Gordon picked up the sixth triumph of his professional career by finishing Oscar Delgado with a second-round rear-naked choke. After a steady first round that saw both men score in the standup, “Truck” elected to take his foe to the mat in round two, slamming him to the canvas with a powerful double-leg takedown.

A flurry of ground-and-pound followed, forcing Delgado to expose his neck and subsequently tap out at 1:32 of the second period.

In preliminary action, Yosdenis Cedeno outpointed Trent McCown in a unanimous decision, while Valdir Araujo knocked out Alik Tseiko in the waning minutes of their three-round contest. Additionally, Ailton Barbosa stopped Frank Carrillo via technical knockout, while Charles Rosa and Jose Caceres both forced their opponents to tap out, earning submissions over Aaron Steadman and Kamarudeen Usman, respectively. Earlier, Gleidson DeJesus edged Yvon Agenord in a split decision, while Rico Farrington cruised to a unanimous verdict over Jacob Gombocz.