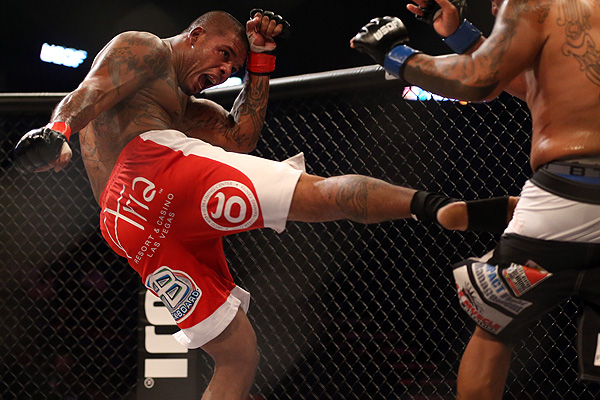 An injury has forced Tyrone Spong out of the BKB3 main event. | Dave Mandel/Sherdog.com


One of the most compelling battles of the weekend has been shelved.

Popular Dutch-based kickboxer Tyrone Spong was scheduled to meet Julian Pollard in the featured bout of the Big Knockout Boxing 3 card on Saturday at the Mandalay Bay in Las Vegas, but he sustained an injury in training earlier this week and has been forced off the card.

Filling in for Spong is Rodney Hernandez, a professional boxer from Modesto, Calif. with a 7-2-1 record. Pollard, an undefeated knockout artist who has stopped every opponent he’s faced as a pro, has agreed to the last-minute opponent change and will still fight for the BKB heavyweight championship.

BKB is a high-energy hybrid of the Sweet Science where the combatants are urged to continuously gun for the knockout. The battles take place inside “The Pit,” a 17-foot across circular ring with no corners or ropes, essentially forcing the fighters to go toe-to-toe. The rounds are only two minutes apiece compared to the traditional three-minute marches of boxing and kickboxing.

The card is anchored by a junior middleweight bout between longtime veteran Jesus Soto-Karas and Adrian Granados and a middleweight tilt between Shane Mosley Jr. and Jason Kelly. There are five additional bouts scheduled for the event, which is scheduled to start at 9 p.m. ET/6 p.m. PT. Tickets for BKB 3 are still available.

Sherdog.com confirmed with a WSOF official that Spong is still expected to compete against Mike Kyle at WSOF 22 on Aug. 1.