Cyrille Diabate bounced back from the first loss of his UFC career by battering former WEC light heavyweight champion Steve Cantwell from pillar to post, as he cruised to a unanimous decision victory at UFC Live 3 “Sanchez vs. Kampmann” on Thursday at the KFC Yum! Center in Louisville, Ky.

Diabate spent the first round outclassing Cantwell standing before the American scored a takedown. The advantage would be short-lived, however, as Cantwell did little with the position and allowed the Frenchman to scramble to his feet. From that point onward, it was all Diabate, as “The Snake” toyed with his foe until the final horn, landing shots to Cantwell’s face and ribs at will.

After two back-and-forth rounds that saw everything from sharp combinations to powerful slams, it was Castillo who looked fresher in the third frame. Though “Daddy” repeatedly tried to finish the fight with his patented arm-in guillotine choke, Castillo’s defense was true, and he escaped each attempt. As the judges' scores were read, Castillo’s hand was raised, a winner on all three scorecards: 30-27, 29-28 and 29-28.

In round one, Tavares bombarded the American with a flurry of punches against the cage, but Roller's defense was solid. Roller found his foe’s chin with a sweet right hand that spelled disaster for the Brazilian in the second. Roller pounced and landed a few superfluous blows before referee Mario Yamasaki could intervene at 1:28 of the second frame.

In a possible candidate for “Fight of the Night,” former WEC bantamweight title challenger Takeya Mizugaki rebounded from his November defeat to Urijah Faber by edging out newcomer Reuben Duran in a three-round split decision.

All three rounds were close, with both men landing blows standing and on the mat. In the end, it was the Japanese fighter who had his hand raised, earning scores of 30-27, 29-28 and 27-30 to take the win over the Pinnacle Jiu-Jitsu and MMA product. 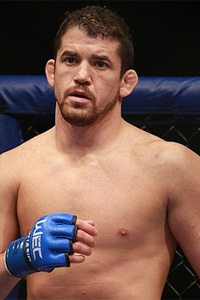 In the first frame, Branch took the fight to the floor, but Palhares defended well from his back. The Brazilian first threatened with an armbar and then transitioned to a triangle attempt. While trying to pass to half guard, Branch was caught in a leg lock and rolled to escape the hold. As the round expired, Branch unleashed some nice ground-and-pound that may have stolen the round.

The second period was all Palhares, however, as the 31-year-old grabbed a single-leg against the cage and transitioned to a heel hook, forcing Branch to tap out at 1:44 of the round.

Korean Top Team representative Dongi Yang had his hand raised for the first time in the Octagon, as “The Ox” earned a second-round technical knockout win over Greg Jackson product Rob Kimmons.

Round one belonged to Yang, as the Korean dropped Kimmons with a lead left hand, pouncing before ending up in the American’s guard. From there, Yang dropped ground-and-pound before passing to mount and securing an arm triangle. Unable to pass to side control, Yang gave up the hold, and Kimmons found his way back to his feet for a moment before his opponent again put him on his back. The Korean nearly finished the fight with a keylock as the round expired.

The second period also had Yang’s name on it, but Kimmons fought gamely to start the frame, throwing his foe to the canvas with a beautiful hip toss. Yang wiggled out of bottom position, however, and then took Kimmons’ back, landing a barrage of punches that ended it at 4:47 of round two.

In the show’s opening contest, Igor Pokrajac earned a first-round TKO over Todd Brown, when the light heavyweight could not make it back to his corner after the frame.

After the pair exchanged standing to start the bout, the Croat attempted to grab a Thai plum, only to find himself with his back against the cage. The fighters separated, and Pokrajac landed a dandy of a right that buckled his foe’s knees and elicited a takedown attempt. After straining for the single-leg, the “Bulldog” finally gave up and stood. His defense proved futile, however, as he was caught in the clinch and dropped with a hard knee. Pokrajac pounded away as the round came to a close, and the fight was waved off with no time remaining in the round.