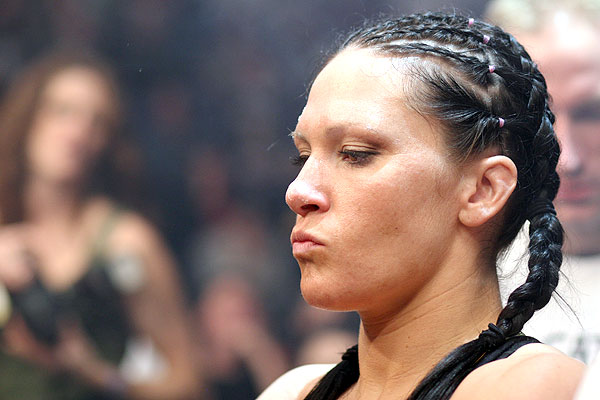 In the wake of her canceled Strikeforce debut, Cat Zingano is headed back to Invicta Fighting Championships for an Oct. 6 bantamweight showdown with Raquel Pennington at Invicta FC 3.

Zingano was initially slated to face Leslie Smith at the event before she was pulled from that bout in order to square off with Amanda Nunes at Strikeforce “Melendez vs. Healy” on Sept. 29. However, that show was called off Sunday night after headliner Gilbert Melendez withdrew from his lightweight title defense against Pat Healy due to injury. According to the official release, Invicta then offered to hold the Zingano-Nunes bout on Oct. 6, but a late injury to Nunes rendered the offer moot.

As a result, Zingano now faces Pennington, whose original opponent, Kim Connor-Hamby, was also injured. The all-female promotion’s third effort takes place at Memorial Hall in Kansas City, Kan., and is headlined by a 105-pound title bout between Jessica Penne and Naho Sugiyama. The event streams live on InvictaFC.com.

“We are excited about bringing Cat back into the fold and to be able to give her the opportunity to compete on an Invicta FC card after preparing as much as she did for her scheduled fight with Amanda,” said Invicta FC President Shannon Knapp.

Pennington, meanwhile, has posted a 3-1 pro record after compiling a 7-1 mark as an amateur. The 24-year-old made her Invicta FC debut on July 28, outpointing Sarah Moras at the promotion’s sophomore show. Most recently, Pennington stopped Raquel Pa’aluhi on Sept. 8, submitting the Hawaiian with a first-round guillotine choke under the Destiny MMA banner.