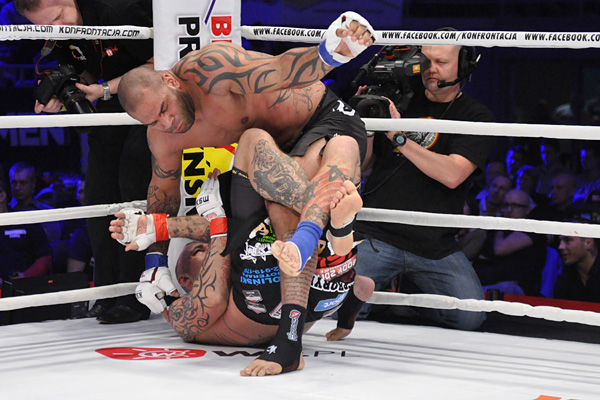 For a brief moment, Valentijn Overeem looked like his younger brother.

Le Banner was nixed from headlining against Plock native Rozalski due to a knee injury before Overeem opted to take the bout on just four days’ notice.

Overeem, who has developed a reputation as a shrinking violet, showed no fear of exchanging early, attacking “Rozal” with heavy punch combinations and a flying knee. However, after putting Rozalski on the mat, Overeem and his foe engaged in a prolonged, crude leglock battle. Though the advantage for Overeem seemed clear -- “The Python” entered with 16 years of pro MMA experience against Rozalski’s three MMA bouts -- the Pole actually wrenched an Achilles lock of his own for a moment.

Eventually, Overeem went belly down on Rozalski’s leg, torquing a toe hold that forced a tap at 2:25 of the first frame.

During his last trip to Poland in November 2009, Overeem tapped to strikes in just 77 seconds against Rafal Dabrowski, who hadn’t fought for four years prior. Since the damning Daborwski loss, the 35-year-old Overeem has won four of five with four first-round stoppages.

Blachowicz, who spent time in Holland with Gegard Mousasi prior to the fight, was originally slated to meet another UFC veteran in Dave Branch. Passport issues for Branch left Blachowicz without an opponent until Miranda stepped up on less than one week’s notice.

The bout was not especially thrilling, but it was clear-cut. Though most of the 15 minutes was spent clinching along the ropes, the first and third round featured strong salvos of offense from the Polish product, who scored with left hands and heavy kicks to the head and body. In both rounds, Miranda was forced to the ropes, reeling from Blachowicz kicks to the body. No Blachowicz flurry could put the Kirkland, Wash.-based Brazilian out, but the unanimous decision was well-appointed.

Blachowicz’s win, his 15th in 18 career bouts, comes a day after his 29th birthday.

After knocking out UFC veteran Maciej Jewtuszko in just 46 seconds this past November, Artur Sowinski looked like he might be Poland's next hot prospect. In his first outing since his breakthrough win, he was in over his head against another fighter owning a win over Jewtuszko, British UFC vet Curt Warburton.

The 30-year-old Warburton used heavy low kicks and superior wrestling to control proceedings. Though Sowinski landed isolated punches and kicks standing, the Wolfslair rep was too steady in his attack. In the second round, Warburton slowly set up and arm-triangle choke from guard, passed to the side and forced the tap at 3:03 of the frame.

Warburton, 1-2 in his UFC stint, moves to 9-3 with the victory and has won back-to-back bouts since his Octagon release.

The aforementioned Jewtuszko got back into the winner's circle, savaging British TUF 9 alum Dean Amasinger in the first round.

Jewtuszko got off to an iffy start, kneeing Amasinger low and following up with a salvo of knees that earned him a point deduction. After the foul, an Amasinger takedown led to a Jewtuszko leglock attempt. The Polish fighter took top position in the scramble and instantly landed a heavy right hand that dazed the Brit. Jewtuszko followed up with frantic punches and hammerfists until referee Tomasz Bronder halted the beating at 3:39.

The undefeated run of David Oliva came to an end, as Szczecin’s Karol Bedorf dominated both rounds of their heavyweight affair. Bedorf, 28, routinely all of Oliva’s takedown attempts before claiming top position for himself. Though Oliva flashed with a guillotine midway through the second round, both periods ended the same: Bedorf with back mount, bashing Oliva in the head and threatening with rear-naked chokes.

In just his second bout in the last two years due to injuries, the ADCC Submission Wrestling World Championships veteran took a 20-18 sweep on the scorecards, moving to 7-2 in his career.

Kamil Walus vanquished debuting strongman convert Kamil Bazelak not long into their heavyweight tilt. The underprepared Bazelak could hit only air before the 23-year-old Walus dropped him with a wild right and followed up with punches until referee Piotr Baginski was forced to stop the pummeling at just 1:48.

In the evening’s opener, lightweight Anzor Azhiev moved to 2-0 in his young career taking three 20-18 scorecards over Cengiz Dana. Azhiev showed flashes of his teammate Mamed Khalidov’s arsenal, scoring with a brilliant flying knee in the second, however, it was his powerful takedowns that allowed him to take control of the bout.