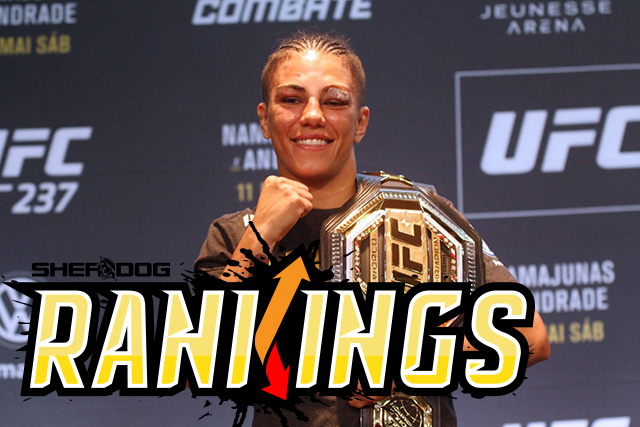 You can sign up for a free seven-day trial of ESPN+ right here, and you can then stream UFC on ESPN+ live on your computer, phone, tablet or streaming device via the ESPN app.

Saturday was a night of memorable knockouts and finishes, but none stood out more than the slam that gave Jessica Andrade the strawweight championship at UFC 237.

After getting outclassed for more than a round by Rose Namajunas, Andrade used brute force to claim the 115-pound throne, knocking her opponent unconscious by essentially dropping her on her head. With that, “Bate Estaca” assumes the No. 1 spot at strawweight, while the second-ranked Namajunas is left to ponder retirement.

Elsewhere, Douglas Lima ended Michael Page’s unbeaten run in emphatic fashion at Bellator 221, advancing in the welterweight grand prix to face the winner of the Rory MacDonald-Neiman Gracie semifinal set for June 14. Lima doesn’t move up past the eighth spot by virtue of his head-to-head loss to the seventh-ranked “Red King,” but the ex-champ clearly has more momentum than the current one at this point in time. Shortly after Lima’s knockout, Patricio Freire scored an even more shocking stoppage, as he finished Michael Chandler in the opening stanza of the Bellator 221 headliner to become a two-division champion. While the win occurred at 155 pounds, the younger “Pitbull” brother is still more than deserving of a spot on the featherweight contenders list after winning 11 of his past 12 bouts in his primary weight class.

Meanwhile, Jared Cannonier will be remembered for all the wrong reasons in Brazil, as he sent the legendary Anderson Silva limping out of the Octagon with a leg kick in the opening stanza of the UFC 237 co-main event. Cannonier doesn’t move past the No. 9 position in our middleweight rankings, but back-to-back finishes have proven that the move to 185 pounds is paying dividends for “The Killa Gorilla.”

Finally, Alexander Volkanovski staked his claim to the No. 1 contender’s spot at featherweight with a smothering decision win over Jose Aldo in another featured contest at UFC 237. Volkanovski has won five straight at 145 pounds in the UFC and seven in a row within the Las Vegas-based promotion overall. His ascent is reflected in our rankings, as he claims the No. 2 featherweight spot behind reigning champion Max Holloway.