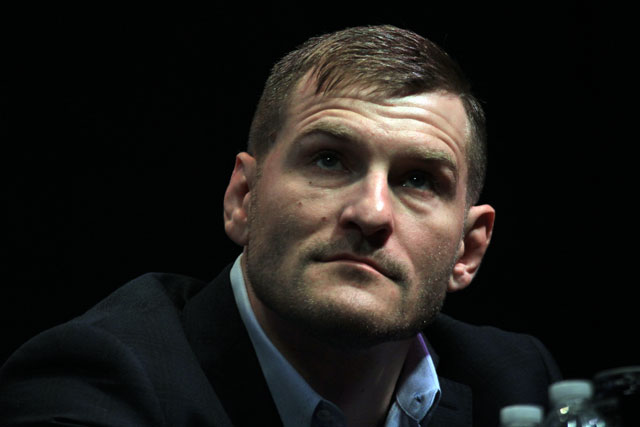 The bubble may burst, but for now, it is a good time to be a Cleveland sports fan. The Indians are over .500, the Cavaliers are in a second straight NBA Finals and Miocic has UFC heavyweight gold. Now, MMA's favorite firefighter-stroke-championship fighter gets the chance to put on a show for his city: Miocic will make the first defense of his heavyweight title against Alistair Overeem at UFC 203 on Sept. 10.

Since losing his UFC heavyweight title to Stipe Miocic at UFC 198 in embarrassing fashion before 45,000 fans in Curitiba, Brazil, Werdum has been adamant he deserves a rematch against the Ohio native. In order for “Vai Cavalo” to earn another crack at the gold he once held, he will need to get back in the win column come UFC 203, on the undercard of Miocic's first title defense against Alistair Overeem. There, Werdum takes on Ben Rothwell.

Returning from an injury-laden layoff of nearly two years, Velasquez struggled mightily and ultimately surrendered his heavyweight crown to Fabricio Werdum at UFC 188. Whether due to ring rust or the Mexico City altitude, Velasquez faded fast after the opening round; by the third frame, Werdum’s strikes rocked him into an ill-advised takedown attempt which ended in a guillotine choke submission. It was the first submission loss of Velasquez’s career and his first defeat since falling to Junior dos Santos in November 2011. The former champion will return to the cage opposite Travis Browne at UFC 200.

Since he entered the Octagon going on six years ago, onlookers have wondered when or if Overeem would get a chance to fight for the UFC heavyweight title. “The Demolition Man” is finally primed for his title opportunity, as his four straight wins -- he most recently knocked off Andrei Arlovski -- have earned him a crack at newly minted champion Stipe Miocic at UFC 203, in Miocic's backyard of Cleveland, Ohio.

Dos Santos executed a perfect game plan in his April 10 bout with Ben Rothwell, as the hard-hitting Brazilian used his speed and boxing prowess to beat Rothwell to the punch for five rounds. It was the sharpest outing for “Cigano” since he lost his UFC heavyweight belt to Cain Velasquez in 2013; now, dos Santos will look to string together back-to-back wins for the first time since 2011.

Arlovski's last two opponents, Stipe Miocic and Alistair Overeem, both knocked out “The Pit Bull,” and now they're going to fight one another over UFC gold at UFC 203 in September. In order for the 37-year-old former UFC champion to get another shot at the heavyweight title, Arlovski will first have to deal with another perennial standout heavyweight on the comeback trail, taking on fellow former UFC champ Josh Barnett in the main event of a UFC Fight Night card on Sept. 3 in Hamburg, Germany.

Rothwell's surprise four-fight winning streak came to an end in April, when a rejuvenated Junior dos Santos boxed him up for five rounds in Zagreb, Croatia. However, Rothwell can maintain relevance in the heavyweight division and buoy himself with hopes for a title shot in the near future if he can overcome recently dethroned UFC heavyweight champion Fabricio Werdum when the two square off at UFC 203 in September.

There's an undying charm to “Mr. Hunto” that makes hardcore fans thrilled any time he steps into the cage, whether his opponent is an elite heavyweight or more in the freakshow realm. As soon as Zuffa announced that former UFC heavyweight champion and current World Wrestling Entertainment star Brock Lesnar was returning to the Octagon, it was hard to deny that Hunt would make an ideal opponent. Well, MMA fans get their wish: Lesnar's comeback at UFC 200 will come against “The Super Samoan” in a bout that despite unanimous approval, somehow still seems more WWE than UFC.

Browne collected an ugly, foul-marred win on Jan. 17 in Boston, as he polished off Matt Mitrione with third-round punches after twice poking him in the eye. Nonetheless, the fight put “Hapa” back in the win column eight months after he was knocked out by Andrei Arlovski. Browne began his UFC stint on a 7-1-1 tear but has alternated wins and losses in his last four outings. The Hawaiian will be back in action at UFC 200, where he will battle former champion Cain Velasquez.

Eighteen opponents have tested Vitaly Minakov and every single one of them has failed. Most recently, it was longtime K-1 veteran Peter Graham on June 17 getting armbarred in 62 seconds by the Fight Nights Team star. The question surrounding the former Bellator MMA heavyweight champ isn't whether or not he's an elite heavyweight -- he most certainly is -- but whether or not he'll ever become a full-time fighter and wind up in the UFC.