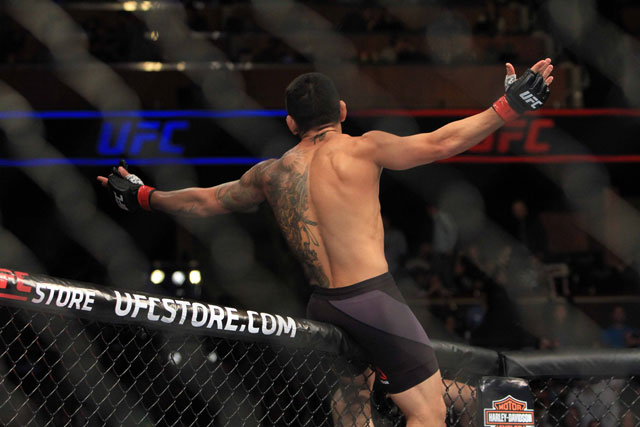 Rafael dos Anjos is without peer when it comes to recent résumés inside the Octagon.

In the 18 months since his last defeat, dos Anjos has peeled off five consecutive victories, including one which netted him the UFC lightweight championship. The 31-year-old has dominated in the organization’s most volatile division, including a rout of the dynamic Anthony Pettis and a knockout of the famously durable Benson Henderson. Dos Anjos’ first defense against Donald Cerrone was not just a success but a complete wipeout.

Dos Anjos on Dec. 19 laid waste to Cerrone in just 66 seconds, breaking the record for the fastest win in the history of the title. While Cerrone may not have been a pound-for-pound entrant, he was undoubtedly one of the most dangerous contenders at 155 pounds and had won eight in a row leading up to the bout. Dos Anjos’ quick and precise finish of “Cowboy” proved once again that the Brazilian jiu-jitsu black belt is one to be feared on the feet as well as the floor.

In this edition of Sherdog’s pound-for-pound rankings, dos Anjos rises two spots to No. 2, while formerly second-ranked Demetrious Johnson drops to No. 3.

Jones has been out of commission since January after being suspended by the UFC and stripped of his light heavyweight title, but it has done little to diminish his status as the world’s premier mixed martial artist. Prior to his well-documented legal troubles, Jones was riding roughshod over the 205-pound class and had defended the belt a division-record eight times. Now reinstated, the 28-year-old continues to train and has also taken up powerlifting while he awaits his return, which is expected to come in the first half of 2016. When he does re-enter the Octagon, Jones will be headed for a rematch with nemesis Daniel Cormier, who now holds the belt which “Bones” never lost in the cage.

It took a full five rounds for dos Anjos to wrest the UFC lightweight title from Anthony Pettis, but the new champ’s first defense lasted nowhere near as long. Dos Anjos on Dec. 19 needed only 66 seconds to melt old foe Donald Cerrone with a vicious mixture of strikes, making easy work out of one of the division’s most dangerous contenders. Since 2012, the Brazilian has racked up a remarkable 10-1 run inside the Octagon, his only loss coming against Khabib Nurmagomedov. While that rematch will no doubt materialize once both men are fully healthy, dos Anjos has meanwhile called for a superfight with newly crowned featherweight ace Conor McGregor.

Johnson continues to reign supreme over the 125-pound division. His latest feat came at UFC 191, where the 29-year-old defended his belt for the seventh time -- Anderson Silva holds the all-time record at 10 -- with a lopsided decision over “The Ultimate Fighter” Season 14 winner John Dodson. In a little less than three years as champion, “Mighty Mouse” has taken out all contenders in his weight class, and he has done so in convincing fashion. Johnson will carry a nine-fight winning streak into his next appearance.

Rockhold made the most of what he believed was an overdue title shot, grabbing the middleweight crown at UFC 194 and handing Chris Weidman his first defeat in the process. The American Kickboxing Academy product put on the performance of his career to slice, pound and eventually finish Weidman in the fourth frame. Since entering the Octagon as the final Strikeforce 185-pound champ, Rockhold has recorded impressive finishes against the likes of Lyoto Machida and Michael Bisping , with the only blemish on his 5-1 mark coming in a knockout loss to Vitor Belfort.

McGregor has taken the featherweight class and the MMA world by storm in the two and a half years since he landed in the Octagon. With the spotlight aimed squarely at the Irishman for UFC 194, McGregor cleared the last hurdle to greatness by laying waste to featherweight king Jose Aldo in quick and brutal fashion. The coronation capped a year which saw “Notorious” knock out Chad Mendes and Dennis Siver, all the while garnering media attention to rival that of Ronda Rousey. While it remains to be seen whether McGregor will stick around at 145 pounds or head up to 155, one thing is for sure: All eyes will be on his next bout.

All things must pass, and Aldo’s time as the invincible ruler of the featherweight division came to a shocking conclusion at UFC 194. The only undisputed 145-pound champion the Octagon had ever known was knocked senseless by Conor McGregor in only 13 seconds, slamming shut the book on an era of divisional dominance. As WEC and UFC champion, Aldo bested the likes of Urijah Faber (twice), Frankie Edgar and Kenny Florian. With near-constant injuries keeping “Scarface” out of action for extended stretches, stringing together another such run could prove extremely difficult.

After 13 professional fights without a defeat and two wins over middleweight legend Anderson Silva, the “All-American” finally met his match at UFC 194. Weidman struggled valiantly but could not withstand the punishing ground-and-pound of Luke Rockhold, who snatched away the UFC 185-pound title with a fourth-round stoppage. The 31-year-old New Yorker defended the belt three times -- including a May knockout of former Rockhold foil Vitor Belfort -- before being deposed.

In the year since his failed bid to dethrone Jon Jones, Cormier has claimed the mantle left vacant when his rival was stripped and suspended by the UFC. The 36-year-old became MMA’s de facto light heavyweight ruler when he dismantled Anthony Johnson in May, then followed up with an impressive defense against Alexander Gustafsson in October. Hardware aside, Cormier’s record boasts some impressive names, with victories over former heavyweight champs like Josh Barnett and Frank Mir, plus heavy hitters such as Johnson and Dan Henderson. He figures to have another meeting with the newly reinstated Jones in the near future.

For years, Werdum was regarded as the best heavyweight grappler in MMA. Since running over Cain Velasquez at UFC 188, the 37-year-old Brazilian is being recognized as the best heavyweight in MMA, period. “Vai Cavalo” is currently on a 6-0 run inside the Octagon, and his outstanding résumé includes wins over divisional icons Fedor Emelianenko and Antonio Rodrigo Nogueira. In order to cement his status as the top big man in the sport, Werdum will have to beat Velasquez again when they rematch at UFC 196 in February.

The first man to successfully defend the UFC welterweight title in the post-Georges St. Pierre era, Lawler has taken what the division’s big hitters have to offer and given in back in spades, most recently halting Rory MacDonald in a back-and-forth battle on July 11. Since rejoining the UFC in February 2013, Lawler has gone 7-1 with four knockouts. “Ruthless” will next defend his title against another elite, all-action 170-pounder, Carlos Condit, at UFC 195.