Jose Aldo will enter the cage on a 13-fight winning streak. | Photo: Sherdog.com 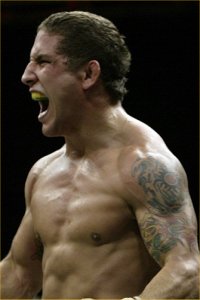 Chad Mendes File Photo
Mendes is unbeaten as a pro.
Prior to UFC 134 in August, the Ultimate Fighting Championship had not hosted an event in Brazil in 13 years. Its return -- featuring frenzied fans, compelling matchups and thrilling finishes -- was electric. Now, just five months later, the UFC is back in the MMA hotbed with an offering that features the explosive talents of featherweight champion Jose Aldo.

In his first time as the headliner on a UFC card, “Scarface” will attempt to defend his crown against the wrestling-oriented attack of Team Alpha Male product Chad Mendes. On paper, it looks like the classic striker-versus-wrestler matchup, and there is little doubt Aldo will be amped to put on a show after going the distance in his previous two fights.

An emphatic finish of Mendes would not only delight the home folks but further solidify the Nova Uniao representative’s place among the sport’s pound-for-pound greatest.

The card also features a potentially explosive middleweight showdown between Vitor Belfort and Anthony Johnson, as “Rumble” looks to test the waters at 185 pounds for the first time in his career. With at least one fighter competing for the home team in every bout, fans at the HSBC Arena in Rio de Janeiro should have plenty of reasons to cheer on Saturday.

A look at the UFC 142 “Aldo vs. Mendes” main card, with analysis and picks:

The Matchup: Without an explosive finish to his name in 2011, is it possible that one of the world’s best pound-for-pound fighters has become slightly underappreciated? A pair of five-round victories over Mark Hominick and Kenny Florian might be disappointing to those who were spoiled Aldo’s dominance in the WEC, where the Brazilian stopped all but one of his eight opponents, but such travails are part of a champion’s journey. A fighter who can persevere through multiple 25-minute battles is capable of an extended title reign, and with Aldo’s considerable skills, the next highlight-reel knockout could be just around the corner.

Mendes is an interesting case in that he is a number one contender who has yet to appear on the main card of a UFC pay-per-view. Some of that can be attributed to the relative youth of the featherweight division in the promotion, but five decisions in six UFC and WEC appearances have played a role, as well. The Team Alpha Male product is big and strong with good conditioning, assets that will aid him immensely if he is to upset Aldo.

The champion’s standup is fearsome, as he can stand in the pocket and punish foes with powerful kicks and counters. The speed and accuracy of Aldo’s striking is unmatched at 145 pounds, and his uncanny ability to control distance allows him to keep the action upright for extended periods of time. Mendes began his career as a wrestler with rudimentary skills in other areas, but his standup has improved enough to become a viable weapon. In his most recent victory over Rani Yahya, he displayed an attack that included leg kicks, body punches and a flying knee. Still, wrestling is Mendes’ bread and butter, and he has a powerful right hand that allows him to transition to takedowns.

Kenny Florian experienced brief success against Aldo by moving forward and pressing the Nova Uniao representative against the cage in the clinch. Mendes would be wise to do the same and hope that he can drain Aldo’s gas tank as the contest advances into the championship rounds. Hominick absorbed a tremendous amount of punishment for four rounds against Aldo but mounted a rally in the final frame as the champion became fatigued. Drawing Aldo into a cardio-draining wrestling match is easier said than done, however, because he has excellent takedown defense and is known for throwing knees as opponents press forward. Aldo can limit the threat of a Mendes takedown by starching him with thudding inside leg kicks, many of which are preceded by punches to the body.

Aldo has an explosive shot himself and has proven capable of passing guard with ease to set up short elbows and punches from the mount.

Mendes is most dangerous when his opponent does not have the tools to keep the fight standing. Neither Michihiro Omigawa nor Yahya could threaten the 26-year-old Californian enough to prevent him from dictating the location of the action. Aldo is a whole different ballgame. If Urijah Faber had trouble closing the distance against the Brazilian, it is hard to imagine his teammate having much more success.

The Pick: The X-factor in this bout revolves around how Aldo will react if he is planted on his back. His underrated grappling and submission game is rarely seen, but it could prove useful against Mendes, who is as strong and physical as anyone Aldo has faced. Mendes’ best chance is to tire out Aldo with takedowns and ground-and-pound, but the Brazilian’s precise striking is more than enough to deter that approach. Fighting in his homeland will give Aldo added incentive to put on a show, and he will deliver the finish that has been lacking in his last two appearances. As Mendes’ takedown shots become less crisp, Aldo will capitalize for a technical knockout in round three.