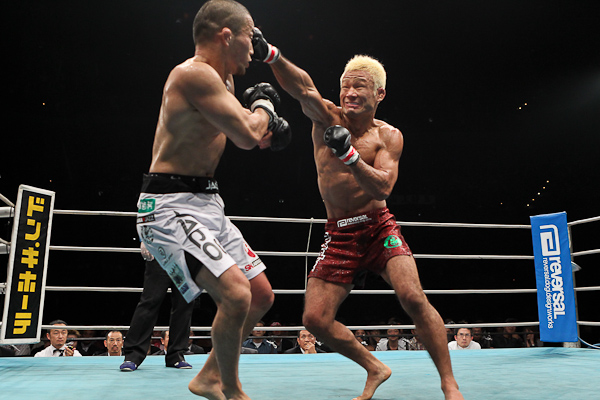 
Asian MMA returns during the month of February. In addition to trans-regional power player One Fighting Championship, Pacific Xtreme Combat continues to promote entertaining events with internationally relevant fights. Japan is also enjoying a minor surge in the marketplace, as the lower weight classes still yield plenty of promising talent in the Land of the Rising Sun, talent that could sooner or later find its way into the famed Ultimate Fighting Championship Octagon.

Our monthly “Tussles” feature -- which takes readers around the globe in an effort to broaden their MMA horizons and showcase the best fights and fighters that might not draw much attention otherwise -- surveys the mixed martial arts landscape, training its spotlight on former Shooto 123-pound champion Shinichi Kojima, volatile British striker Paul Daley and Bellator Fighting Championships Season 2 welterweight tournament finalist Dan Hornbuckle, among others.

As always, the list does not focus on the well-promoted main event bouts from major organizations you already know to watch, but rather on fights from all over the planet that are worth seeing. UFC and Bellator cards are excluded by design.

Leading Asian organization One FC returns to Malaysia with its first 2013 event, co-headlined by former Shooto bantamweight champion Kojima and undefeated Filipino star Docyogen. “BJ” ruled the Shooto 123-pound division with an iron fist from 2006 to 2010, until a torn knee ligament stopped him in his tracks. “The Punisher,” four years Kojima’s junior, comes from a Sanda background but has displayed equal strengths in striking and grappling during his 10 appearances for his home promotion, the Universal Reality Combat Championship. One FC's undercard streams live on Sherdog.com at 6 a.m. ET.

After a strong showing against former UFC heavyweight champion Andrei Arlovski in December, former Cage Warriors Fighting Championship titleholder Hayes gets a second opportunity to show his well-rounded set of skills to the Russian fans at Fight Nights “Battle of Moscow 10.” This time, he will be the odds-on favorite, as he faces Bellator-signed boxer Magomedov. The Russian “Leopard” has an almost perfect record, with the only blemish coming against the “King of the Liver Shot,” Konstantin Gluhov, in the final of a four-man tournament in the Ukraine in 2011.

Many Asian MMA experts view Guam’s “Baby Joe” Taimanglo as not only the strongest mixed martial artist to ever hail from the largest island in Micronesia but also one of the top bantamweight prospects in all of Asia. The 28-year-old submission specialist tried out for Season 14 of “The Ultimate Fighter” but did not make the final cut. Now he tries to reach the UFC via second chance. Standing in his way is ninth-ranked bantamweight Shooter Tanaka, who is coming off an upset over previously undefeated Hawaiian Russell Doane in November.

Texas promotion Legacy Fighting Championship put together some excellent fights last year and continues that trend in 2013. Headlining its first event of the year is a battle between UFC veteran Spratt and Bellator Season 2 welterweight tournament finalist Hornbuckle. American Top Team’s Hornbuckle took a break from fighting after suffering the first back-to-back defeats of his career in 2011. Despite being in the latter stages of his career, the 42-year-old Spratt has been highly competitive of late and is coming off a win over Pride Fighting Championships veteran Daniel Acacio in Brazil.

Nottingham, England’s Daley continues to cultivate his bad boy reputation. A mixture of visa issues and his involvement in a bar brawl in his homeland resulted in the 29-year-old power puncher’s removal from Bellator’s Season 8 welterweight tournament. Without fixed dates in the first quarter of 2013, “Semtex” is instead accepting bookings from across Europe. His first stop will see him face Frenchman Vallee at Cage Contender 16. “Dexter” is a durable all-rounder who has only been knocked out once in his 10-year career.

A classic confrontation between Shooto and Pancrase tops the bill at this Feb. 16 show, as 2008 Shooto rookie champion Kitahara takes on reigning and defending super flyweight King of Pancrase Shimizu in a superb inter-promotional clash. Shimizu has been moving back and forth between Pancrase and Shooto since 2009 and is ranked Top 10 in the latter promotion’s rankings, as well. Kitahara is a talented submission fighter but has lost two of his last four fights by knockout, while Shimizu enters on the strength of a stirring KO win, adding further intrigue to his fight.

This second battle between Germany’s premier heavyweights has been two and a half years in the making. In the summer of 2010, Schmiedeberg upset the heavily favored Kraniotakes in a five-round decision. “Big Daddy,” who has since competed internationally for Cage Warriors and Pro Elite, now looks for revenge. This heavyweight slobberknocker also marks the return of Germany’s top organization, German MMA Championship, from a two-year hiatus. Promotional duo Altintas and Haciabdurrahmanoglu are moving with the times and have swapped the ring for a cage.

“Skullman” Lloveras continues his quest to become the first Spaniard to fight inside the UFC’s Octagon. In his toughest test stateside to date, the 30-year-old Marco Alvan student will take on Classic Entertainment and Sports MMA mainstay Campbell. A two-time World Extreme Cagefighting veteran, Campbell holds a win over super-experienced Yves Edwards and is currently riding a three-fight winning streak. The Rhode Islander also packs a varied striking attack with punches, kicks and knees that can turn out his opponent’s lights at any time. Lloveras, a two-time Spanish boxing champion, figures to come prepared.

Although it could not quite live up to its prolific 2011 campaign, which saw it organize seven events, Australia’s Brace For War promotion still did well with four shows a year ago. After 18 events in Brisbane, Canberra and other cities Down Under, promoter Kya Pate is taking his company to Sydney for the first time. In Brace For War’s latest marquee bout, Legend FC veteran Brown takes on hometown favorite Hill in a classic striker-versus-grappler confrontation. Even though Hill is the much more experienced of the two, Brown will head into the fight as the heavy favorite.