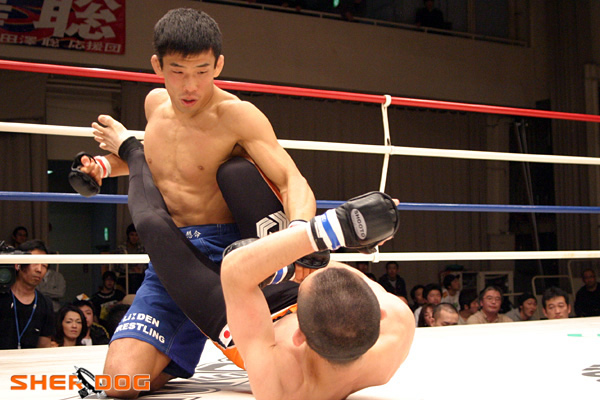 
An argument can be made that the Ultimate Fighting Championship has acquired 90 percent of the world’s premium mixed martial arts talent.

Still, even at the upper echelon of MMA, injuries arise, fighters lose form and defeats pile up. Releases sometimes follow. Exciting new prospects are always in demand to give stale divisions much-needed shots in the arm and comfortable, content contenders firm kicks in the butt. With the sport extending its global reach, it should come as no surprise that fast-rising young talent -- think Dustin Kimura, Hyun Gyu Lim and Conor McGregor -- continues to come forth from the four corners of the earth. Plenty of matches in May shine the spotlight on more of it.

As always, the list does not focus on the well-promoted main event bouts from major organizations you already know to watch, but rather on fights from all over the planet that are worth seeing. UFC and Bellator MMA cards are excluded by design.


Masakatsu Ueda vs. Kevin Belingon
One FC 9 “Rise to Power” | May 31 -- Pasay, Philippines

Famed German football coach Otto Rehhagel once said, “There are no young or old players, just good and bad ones.” The same can be applied to fighting. Because UFC hall of famer Randy Couture made a living beating up opponents half his age, we all know age is just a number. Japan’s Ueda has come into his own since being on the wrong side of 30, as well. The Paraestra Tokyo-trained wrestler has won seven of his last eight matches and will now face Wushu stylist Belingon in the final of the One Fighting Championship bantamweight grand prix. The winner meets champion Soo Chul Kim in the fall. The One FC Undercard will stream live and free on Sherdog.

Cage featherweight champion Niinimaki has been considered a top 10 featherweight in Europe for years. The 30-year-old all-around fighter has put together an impressive unbeaten run that spans nine fights and almost six years. Will win number 10 finally push the Finnish export over the edge and into the world-famous Octagon? Chicago’s Beebe has been there and done that, albeit in the smaller World Extreme Cagefighting cage. The 28-year-old wrestler held the WEC title for almost a year before losing it to Miguel Torres.

The odyssey of “Slava” Vasilevsky has come to an end. After a short side trip to Bellator last year, the former M-1 Global light heavyweight champion returns to the promotion that made him a star in Russia. A lawsuit in front of a Dutch court convinced the fighter that it was probably the smartest decision to fulfill his existing contract before taking on other challenges. In his first fight back, the 24-year-old judoka will face Andrade. The 31-year-old Brazilian has already choked out Vasilevsky’s compatriots, Shamil Abdulmuslimov and Abdul-Kerim Edilov, this year.

In this month’s featured female fight, Sugiyama will put her Jewels 105-pound title on the line against Korean kickboxer Ham. “Sugi Rock” had a rough time in her past two battles, as she was submitted by Jessica Penne for the Invicta Fighting Championships atomweight strap and then lost a unanimous decision to resurgent Norwegian Celine Haga. The title defense against the “Korean Wanderlei” will be a true test to see whether or not she is made of stern stuff. Ham is dropping down from 115 pounds and undoubtedly looking to bully the diminutive Sugiyama.

Solid heavyweight action will headline the second Maximum Fighting Championship event of the year, as Florida’s Barnett takes on the undefeated Rama. “The Prince” turned more than a few heads when he knocked out Mike Hackert at MFC 36 February. In Barnett, he faces an even bigger test. At 5-foot-9 and 265 pounds, the “Beast Boy” is more than a handful for anybody. The 26-year-old holds impressive knockout wins over longtime M-1 champion Kenny Garner and Mario Rinaldi.

Makovsky was one of the stars for Bellator during the pre-Viacom era. However, back-to-back defeats to hugely talented Brazilian Eduardo Dantas and Strikeforce veteran Anthony Leone suddenly saw “Fun Size” out of a job with the promotion. In his first fight back, the 30-year-old submission fighter takes on fellow Bellator alum Claudio Ledesma under the Cage Fury Fighting Championships banner. The Renzo Gracie product has won four of his last five fights on points, the only blemish a close decision loss to the aforementioned Leone.

Ishii has managed to turn around his MMA career with three solid wins over Tim Sylvia, Sean McCorkle and Kerry Schall this year. Continuing to stay busy under the IGF banner, the 2008 Olympic gold medalist will next take on three-time UFC heavyweight title contender Pedro Rizzo. The Brazilian lasted even less time than Ishii against Fedor Emelianenko, as he succumbed to blows from “The Last Emperor” in the Russian great’s retirement fight in June. It makes perfect sense for these two to fight each other now.

A finalist on Season 7 of “The Ultimate Fighter,” Taylor has found a fighting home with the Cage Warriors Fighting Championship promotion in Europe and the Middle East. While he did not manage to win the organization’s welterweight title against Frenchman Gael Grimaud, he fared much better in a middleweight contest against Chris Field on New Year’s Eve. In his first title defense, he now takes on hard-hitting Welshman Phillips. “The White Mike Tyson” has won two of his three CWFC fights and has even started to show a nice little submission game lately.

One of the last legends of the vale tudo age who remain active today, Patino made his name fighting in memorable wars with the likes of Jose Landi-Jons in the 1990s. Still enjoying himself at age 39, the Brazilian jiu-jitsu black belt has gone undefeated in his last seven fights. Looking to break that streak is “The Ultimate Fighter” Season 8 winner Escudero. Twelve years Patino’s junior, the Arizonan is relying on his strong wrestling game to get the job done in his bouts.

Southeast Asia’s PXC promotion has been on fire of late, putting on one meaningful fight after the next. That is why it comes as little surprise that longtime PXC stars Kimura, Lim and Jon Tuck have been drafted to the UFC. Two others looking to make the jump to the Octagon are undefeated Filipino Striegl and Shooto Pacific Rim lightweight champion Yachi. “Mugen” is dangerous on the ground, having taken 10 of his 12 career wins by submission, while Yachi is an explosive striker from Norifumi Yamamoto’s Krazy Bee camp.