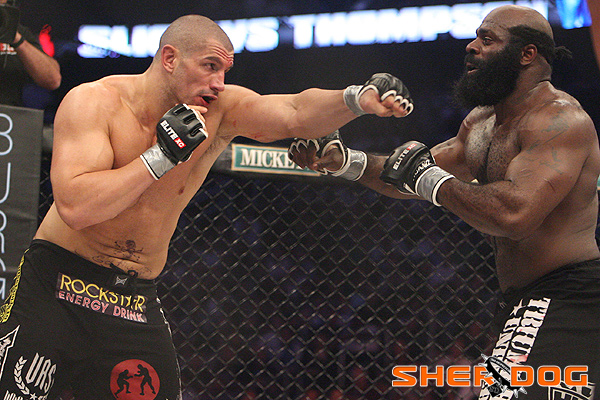 
Bellator MMA kicks off its 2014 Summer Series on Friday, when the Viacom-owned organization holds Bellator 121 at Winstar World Casino in Thackerville, Okla.

The Spike TV-broadcast main card will feature two longtime staples of the fight game, the larger of which is James Thompson. The English heavyweight gained fame in Japan’s Pride Fighting Championships, based largely on his sheer size and willingness to throw caution to the wind and go for broke early. “The Colossus” was never the most skilled big man in the sport, but few possessed his type of action-figure physique and aggressiveness. It is not hard to see why he became popular, despite his pedestrian fight record.

As time went on, however, the novelty wore off. Whereas Thompson’s fights with men like Kazuyuki Fujita and Don Frye held legitimate intrigue, his bouts with the likes of Brett Rogers and Kevin “Kimbo Slice” Ferguson seemed designed to sacrifice Thompson’s name recognition at the altar of men who EliteXC hoped would become top-level talents and big-money draws. I think I will skip talking about Thompson’s cauliflower ear explosion on national television.

More recently, Thompson has competed internationally within India’s Super Fight League and Poland’s KSW. Though he has gone 4-0 with one no contest in his last five fights, his victories have come against the likes of Polish strongman Mariusz Pudzianowski, former World Wrestling Entertainment star Bobby Lashley and onetime Pride mascot Bob Sapp.

Although Bellator’s heavyweight division is still largely a work in progress, Thompson will no doubt face stiffer competition upon stepping into the promotion’s circular cage. Champion Vitaly Minakov is no joke, nor are several of the category’s best, like Alexander Volkov, Cheick Kongo and Blagoi Ivanov.

Before Thompson receives a crack at any of those men, however, he must first contend with former title challenger Eric Prindle. How Thompson handles his promotional debut is only one thing to keep an eye on at Bellator 121. Here is what else to watch for at the event:


Prindle has a limited skill set, but there is no doubt that this man is dangerous if you stand in punching range.

“The American Soldier” has seen his ups and downs as a member of the Bellator roster, posting three victories to begin his promotional run before coming up short against then-champion Cole Konrad. Then there was his pair of bizarre matches with Thiago Santos in which each man was disqualified once for kicking the other in the groin. More recently, Prindle has lost back-to-back fights, first dropping a unanimous decision to former K-1 kickboxing standout Peter Graham and then suffering a third-round knockout at the hands of Javy Ayala in March.

This meeting with Thompson could be an excellent opportunity for Prindle to reassert himself as a viable Bellator heavyweight, but the odds will be stacked against him if the Englishman can swarm him and take him down. Can Prindle catch “The Colossus” with one of those huge fists as the Brit closes the distance? 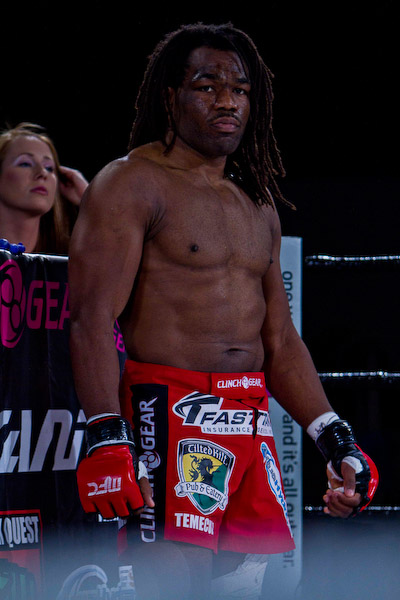 Photo: Jacob Bos/Sherdog.com
Remember Sokoudjou?
Like Prindle and Thompson, Rameau Thierry Sokoudjou has been given another chance to prove himself.

The hard-hitting judoka is talented, no doubt, but he has struggled to find the consistency required to make it at an elite level in this sport. I remember watching his breakout performances in Pride. Back then, knocking out Ricardo Arona and Antonio Rogerio Nogueira in back-to-back fights was cause for great jubilation and, of course, incited speculation about just how high “The African Assassin” could climb.

As it turned out, it was not very high.

This is not to say that Sokoudjou does not own some quality wins outside of the Arona and Nogueira demolitions, but the only one worth mentioning in the last five years is a 2011 stoppage of KSW champion Jan Blachowicz. Sokoudjou was also knocked out in his most recent pair of fights, falling twice on Russian soil last year.

Now, Sokoudjou has the opportunity to show American audiences that he can still compete at a relatively high level. Bellator’s light heavyweight division has taken large strides in the last year, and big-name fights could await the Team Quest rep if he can string together a couple of wins. I have a feeling that several questions surrounding Sokoudjou’s prospects could be answered when he meets 17-fight pro Terry Davinney.


Liam McGeary has already punched his ticket to the Summer Series light heavyweight semifinals. Which of the remaining six men in the bracket will join him?

This field is filled with promising additions to the light heavyweight ranks, including unbeatens Luiz Philipe Lins and James Austin Heidlage, who will lock horns live on Spike TV. Joining them in the quarterfinal round will be Lithuanian veteran Egidijus Valavicius and Ultimate Fighting Championship alum Rodney Wallace, who will take on Carlos Eduardo and Kelly Anundson, respectively.

As previously mentioned, Bellator has made efforts to improve its light heavyweight division, meaning that while there is certainly room for up-and-coming talent or seasoned veterans to make a mark, that process should prove to be considerably more difficult than it was two or three years ago.

Which of these 205-pounders will move on in the tournament and take another step toward earning a title shot?