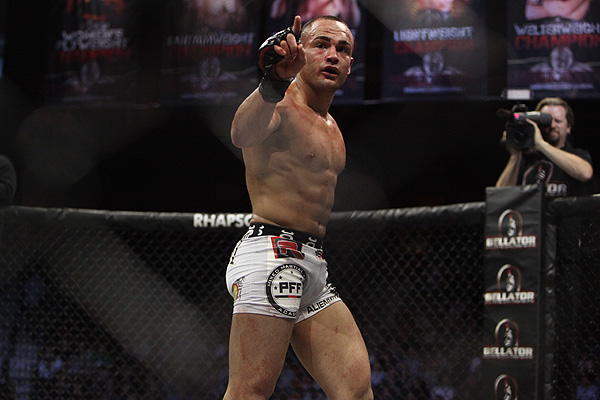 Let’s talk plainly, friends. Bellator 66 is bringing that sweet sugar to your living room. In my opinion, this is the stoutest card the Chicago-based promotion has thrown out this year. Taking place at the I-X Center in Cleveland, the Bellator 66 bill is topped by a lightweight rematch over three years in the making, and also sports a quartet of top-notch tournament semifinals. This is normally where I make a joke about MTV2, but let’s skip it today in light of the exceptional quality of competition. Here are five reasons to watch Bellator 66:


Honestly, what else could I lead with? No doubt that a little shine has been taken off of Eddie Alvarez’s rematch with Shinya Aoki since Alvarez relinquished his Bellator lightweight title to Michael Chandler, but this is still one hell of a fight.

For those unfamiliar with their first go-around, Alvarez and Aoki initially met on New Year’s Eve 2008 at K-1 “Dynamite.” The American snatched the driver’s seat in the bout’s opening moments, taking the center of the ring and gauging his distance to counter-punch. Though Aoki caught a round kick to the ribs and clinched, Alvarez easily tossed “Tobikan Judan” over his hip and passed instantly to the mount.

The wily submission ace did not panic, however, executing a sharp hip escape before wrapping up Alvarez’s right leg in an inverted heel hook. Though the Philadelphia Fight Factory expert tried gamely to roll out of the technique, Aoki eventually found the required leverage and torqued his foe’s knee with all his might.

Over three years have now passed since Alvarez cried out in pain and tapped to Aoki’s heel hook. Can the Pennsylvanian avenge the bitter defeat and reclaim his top-10 ranking, or will Aoki repeat his trick and extend his winning streak to eight fights?


Previously scheduled to face grinder Bruno Santos, Brian Rogers now finds himself opposed by 33-year-old Andreas Spang after the Brazilian withdrew from the tournament with a shoulder injury. Returning to the cage after earning a first-round knockout over Willie Parks at Strikeforce Challengers 20 in November, the “Sweet Swede” presents a much different challenge than Rogers’ previous opponent.

While the undefeated Santos has stopped just two of his 13 career victims, Spang holds five of his seven wins by knockout or submission. What might have been a battle of attrition now holds real explosive potential. Coming in cold as an injury replacement might further fuel Spang’s fire to finish the fight, depending on how large a gas tank he hauls into the cage. One way or another, I see a stoppage in our future, fight fans. Rick Hawn File Photo
No frills here, folks. Rick Hawn is an absolute beast at his new weight. A former Olympic judoka, Hawn made the cut from 170 pounds to lightweight for Season 6, a move that has thus far paid dividends as evidenced by his devastating knockout of Ricardo Tirloni to advance to the tournament semifinals.

On paper, he should do the same to Lloyd Woodard. Then again, the Missoula, Mont., native was also supposed to be outclassed by Patricky Freire in the round of eight before he turned the Pitbull’s elbow into a bowl of Rice Krispies.

Will Hawn take care of business and live up to his hype as a tournament favorite, or will Woodard continue his underdog run and take another step to becoming MMA’s latest ‘Rocky’ story?


Do yourself a favor. When Brent Weedman and Thiago Michel Pereira Silva start fighting, make sure you are in front of the TV.

A high-powered kickboxer from Brazil, Michel possesses rare power for a lightweight. Add to this a solid submission game and a consistent ability to fight back to his feet, and Michel becomes a scary prospect indeed.

One advantage the Brazilian will not hold is in the size department, however, as Weedman -- like Hawn -- previously competed successfully at 170 pounds. The Kentuckian is as seasoned as they come and owns 19 career victories to his credit, including his impressive submission win over J.J. Ambrose to advance to the semis.

Personally, I think it’s going to be a rough night for Weedman, but I’ve been wrong before. If he can take the fight to the floor and work to pass Michel’s guard, he might have a chance of pulling out a finish. This could also prove the case if the American steps inside and lets his hands fly.

The one thing that Weedman absolutely cannot do is stand on the end of Michel’s range and eat kick after kick. Though his toughness often proves an asset, Weedman’s typical willingness to exchange could signal his downfall in Season 6. Either way, this fight should not be missed, MMA fans.


Imagine Bald Bull squaring off with Mr. Sandman for 15 minutes on an eight-bit screen. That’s what I picture when I think about Maiquel Jose Falcao Goncalves and Vyacheslav Vasilevsky squaring off on Friday night.

Save for champion Hector Lombard, Falcao is arguably Bellator’s most dangerous power puncher at middleweight. Even so, the Brazilian has shown a tendency in the past toward hesitating if his opponent appears unwilling to engage. Conversely, when Falcao knows his man is also trying to take his head off as well, he quickly seems to find his range and look for the knockout, in addition to becoming very angry.

This should prove to be the case against Vasilevsky, a smooth and accurate boxer coming fresh off a dominant unanimous decision victory over a game Victor O’Donnell in the quarterfinals. There is a small chance that this could turn into a staring contest if too much mutual respect is shown in the standup department, but I think business will pick up significantly as the bout progresses. If Bellator gave out post-fight bonus checks, my money would be on this baby to win “Fight of the Night.”