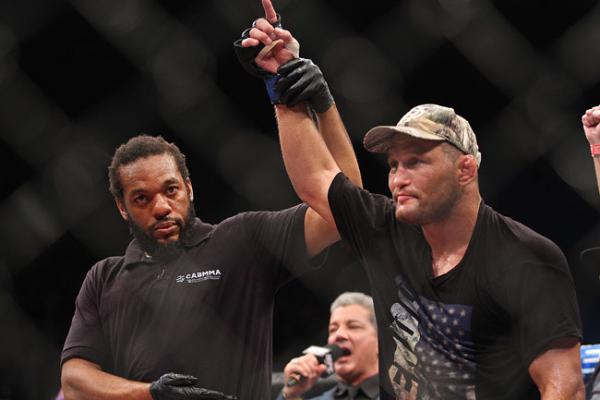 
It might not have been another five-round epic, but the rematch between Dan Henderson and Mauricio Rua still left plenty for the memory banks.

After being knocked down twice and nearly finished in the bout’s opening 10 minutes, Henderson got off his stool and put his trademark right hand to work, knocking out “Shogun” 1:31 into the third stanza of the UFC Fight Night 39 headliner.

It was a perfect way to cap off an evening of high-octane action at the Nelio Dias Gymnasium in Natal, Brazil. Before Henderson and Rua stepped into the Octagon, six different bouts concluded inside of a round. Such violence is almost unfailingly accompanied by a multitude of interesting facts and figures. Here is a by-the-numbers look at UFC Fight Night 39, with statistics courtesy of FightMetric.com.

23: UFC, Pride and Strikeforce wins combined for Henderson. Among fighters who have competed in the UFC, Pride, Strikeforce and the WEC, only Wanderlei Silva (27) has more combined victories.

18: Knockdowns landed in UFC/Pride/Strikeforce/WEC competition for Henderson, tying him with Anderson Silva and Mirko Filipovic for second most all-time. Wanderlei Silva is No. 1 with 27 knockdowns. Henderson dropped Rua with a right hook in the third round.

10: Knockdowns suffered by Dan Henderson in Strikeforce/UFC competition after Sunday’s bout. He was floored once each in the first and second round by Rua. Only Keith Jardine (12) has more in Strikeforce/UFC competition. Despite the numerous knockdowns, Henderson’s only KO/TKO loss during that time came at the hands of Vitor Belfort last November.

30: Signficant strikes landed by Rua in round one, when he appeared to be on the verge of a finish. By comparison, Henderson landed 10 significant strikes in the opening frame.

6,286: Distance, in miles, from San Jose, Calif., where Rua-Henderson I took place, and Natal, Brazil, where the two light heavyweights had their rematch at UFC Fight Night 39.

43: Age of Henderson, making him the oldest active fighter on the UFC’s current roster. “Hendo” became the second-oldest person to record a KO/TKO inside the Octagon with his win over Rua. Only Randy Couture, who was 44 when he stopped Gabriel Gonzaga at UFC 74, was older. Henderson, who recently signed a six-fight deal with the Las Vegas-based promotion, turns 44 on Aug. 24.

4-1: Record for Rua in rematches following to UFC Fight Night 39, as Henderson became the first person to earn a victory over the Brazilian in a return meeting. “Shogun” has avenged losses to Mark Coleman (UFC 93), Forrest Griffin (UFC 76), Lyoto Machida (UFC 113), while also defeating Alistair Overeem for a second time in their rematch at Pride 33 “Second Coming.”

132: Significant strikes landed by Fabio Maldonado in his win over Gian Villante, the third-most ever landed by a light heavyweight in a single UFC bout. The Brazilian outlanded his foe by 113 significant strikes over the course of the bout’s final 10 minutes.

62: Jabs to the head landed by Maldonado, a UFC light heavyweight record.

26: Body shots landed by Maldonado, a light heavyweight record for a three-round fight. He also landed 26 body shots against James McSweeney at UFC 120.

3: Takedowns landed, in 11 attempts, by Prazeres. That figure might have been higher were it not for Taisumov’s repeated attempts to hold the fence. Prazeres also passed guard nine times during the lightweight clash.

2: Fighters who have had a point deducted twice in a single UFC bout that went the distance, according to MMADecisions.com. Before Taisumov, Nate Marquardt lost two points en route to losing a decision against Thales Leites at UFC 85.

34: Significant strikes landed by Jussier da Silva in four UFC appearances. “Formiga” landed nine significant strikes against Scott Jorgensen before submitting the WEC veteran with a rear-naked choke 3:09 into round one. Da Silva has landed double digit significant strikes just once -- 10 in a three-round verdict over Chris Cariaso at UFC on FX 8 -- while going 2-2 during his tenure with the promotion.

2: Israeli-born fighters to compete in the Octagon after Noad Lahat, who is from Alfei Menashe, Samaria, Israel, was knocked out in the first round by Godofredo Castro on Sunday. Moti Horenstein became the first Israeli to fight in the UFC when he submitted to Mark Coleman punches at UFC 10 on July 12, 1996. Coincidentally, Horenstein turned 50 on Sunday.

6: First-round finishes at UFC Fight Night 39, one off the modern era record of seven. No other event in 2014 has had more than four first-round stoppages.