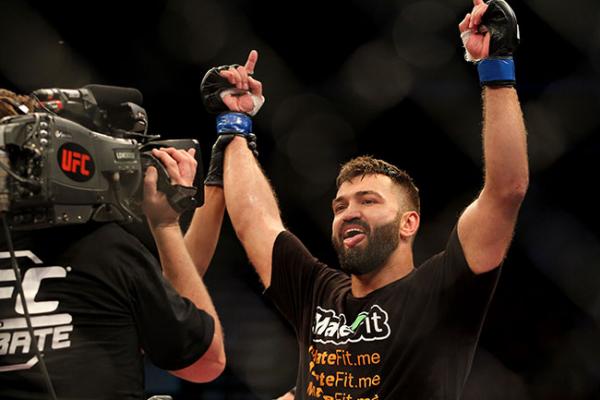 
Perhaps the pundits buried Andrei Arlovski a little too soon.

The former Ultimate Fighting Championship heavyweight titleholder cut down Antonio Silva with a three-punch combination and subsequent hammerfists in the first round of their UFC Fight Night “Bigfoot vs. Arlovski 2” main event on Saturday at Nilson Nelson Gymnasium in Brasilia, Brazil. Arlovski finished it 2:59 into round one, as he improved to 12-4 in the UFC.

Silva had no answer for the Belarusian’s fast hands and skilled feet. Arlovski scored repeatedly with step-in right hands, as he kept the monstrous Brazilian off-balance for the entirety of their brief rematch. A three-punch volley, punctuated by a searing right to the chin, leveled “Bigfoot” and left him at the mercy of Arlovski. “The Pit Bull” wasted no time in capitalizing on the opportunity, as he pounced on his fallen adversary and punched him unconscious with a series of violent, unrestrained hammerfists.

With the victory, which will undoubtedly lead to a significant shakeup to the heavyweight pecking order, Arlovski avenged his decision loss to the onetime EliteXC champion under the Strikeforce banner in May 2010.

In wake of UFC Fight Night “Bigfoot vs. Arlovski 2,” here are six matchups that ought to be considered:

Andrei Arlovski vs. Mark Hunt-Roy Nelson winner: Left for dead following consecutive losses to Silva, Sergei Kharitonov, Brett Rogers and Fedor Emelianenko, Arlovski has gone 8-1 with one no-contest in 10 appearances since. Few had paid serious attention to his resurgence -- until now. Felling “Bigfoot” was a big deal in a division that lacks quality and depth, and Arlovski, 35, will carry a four-fight winning streak into his next outing. Hunt and Nelson will collide in what figures to be a slugfest at a UFC Fight Night event on Sept. 20 in Saitama, Japan.

Antonio Silva vs. Josh Barnett: Silva’s return from a nine-month suspension did not go according to plan. In fact, it could not have gone worse. The Brazilian looked slow and out of sorts in his second go-around with Arlovski, ultimately falling prey to a man with fast hands and more than enough power at his disposal. While his level of competition has been remarkably stout, Silva has won just two of his past seven fights. The fact that he turns 35 in a matter of days also cannot be ignored, as he does not appear to be a fighter who will age well. Barnett has not fought since December, when he was victimized by Travis Browne’s elbows at UFC 168.

Iuri Alcantara vs. Raphael Assuncao-Bryan Caraway winner: Alcantara has established himself as a rock-solid competitor at 135 pounds. The 34-year-old former Jungle Fight champion walked away from his battle with Hawaiian prospect Russell Doane a unanimous decision victor, winning for the 17th time in 20 appearances. Since late 2009, Alcantara has lost only to Urijah Faber and Hacran Dias, two men who between them own a combined 52-10-1 record. Assuncao, believed to be on a short list of potential title contenders in the bantamweight division, and Caraway will lock horns at a UFC Fight Night show in Halifax, Nova Scotia, on Oct. 4.

Jessica Andrade vs. Sarah Kaufman: A new power is rising in the women’s bantamweight division. Andrade dissected the previously unbeaten Larissa Moreira Pacheco, battering her with ground-and-pound before executing a submission via guillotine choke 4:33 into the first round. On a three-fight winning streak, the 22-year-old Andrade has looked spectacular at times and downright frightening at others. Remember, she started her latest tear against Rosi Sexton at UFC Fight Night “Machida vs. Munoz” in October, when, according to FightMetric figures, she landed 215 strikes, a staggering 206 of them significant. A former Strikeforce champion, Kaufman last appeared in April, when she took a unanimous decision from Leslie Smith.

Gleison Tibau vs. Al Iaquinta: Tibau recorded his 15th victory inside the Octagon with his split decision over Piotr Hallmann in the co-main event, tying him with Michael Bisping, Josh Koscheck and Tito Ortiz for sixth on the all-time list. The American Top Team-trained Brazilian owns an 8-3 mark over his last 11 outings and remains a threat to most anyone outside of the cream of the crop at 155 pounds. Serra-Longo Fight Team’s Iaquinta stopped Rodrigo Damm with third-round punches and elbows at UFC Fight Night “Jacare vs. Mousasi 2” on Sept. 5 in Mashantucket, Conn.

Piotr Hallmann vs. Michael Chiesa: Hallmann did nothing to damage his stock in the lightweight division, as he wound up on the wrong side of a split verdict against the aforementioned Tibau. The 27-year-old Pole surged late, cutting Tibau with a third-round knee strikes, but his efforts went for naught on two of the three scorecards. Still, Hallmann has won 11 of his past 13 bouts, and his development bears watching at 155 pounds. An “Ultimate Fighter” winner, Chiesa was victimized by cut-induced stoppage against Joe Lauzon on Sept. 5.