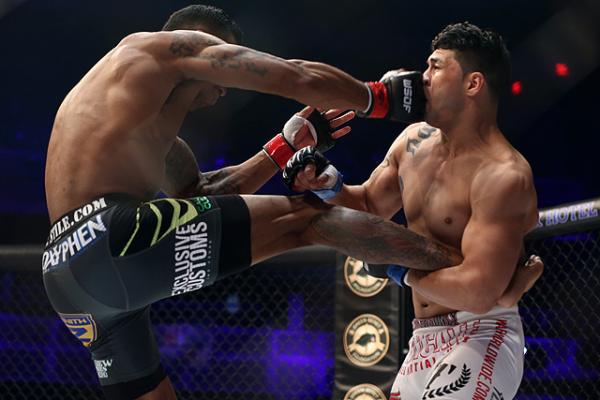 Is the World Series of Fighting’s revenue-sharing PPV model a step in the right direction? | Photo: Dave Mandel


Unless the financial model present in the MMA landscape changes soon, the amount of money outsiders will invest in the sport is going to dry up. The current top-down business model has reached its financial limits in the United States.

The Ultimate Fighting Championship is going to continue making money no matter how sluggish the financial circumstances may appear to be at the box office and on pay-per-view. When top fighters like Cat Zingano are reportedly making $9,000 to show and $9,000 to win, it’s safe to say the promoters are as powerful as ever when it comes to business leverage.

That is why I’m intrigued by the PPV prospects for the World Series of Fighting. The promotion recently announced it would shift its focus to pay-per-view at some point in the future and that it would split 50 percent of the net revenue with the fighters on the PPV cards. This is a step in the right direction in terms of incentivizing fighters to market the WSOF brand. When employees have skin in the game, they’re more motivated to sell your product. Giving fighters a chance to get a bigger cut of the action on PPV is a great selling point to recruit new talent. Curiously, within a couple weeks of announcing intentions to move towards pay-per-view, the WSOF appears to have backed away from its initial comments about shifting in that direction.

Understandably, the PPV-dominated business model controlling MMA investment needs revamping. There seems to be no middle ground at this point. When Viacom purchased Bellator MMA from Bjorn Rebney, it went with a TV-only product and produced it on a tight budget. The ratings increased. As a pure advertising revenue play, Bellator has value on Spike TV. However, people who generally invest money in MMA are impatient and want to make a big splash. Go big or go home. Typically, a person who is trying to attract capital from financial backers is pressured to shift towards PPV within the second or third year of existence. There’s a reason why the failure rate for non-UFC entities in the MMA game is so high. This is a very, very expensive business to launch into and even more costly to maintain a consistent event schedule. Bellator will likely return to PPV in the future, and the WSOF has already publicly announced plans to shift towards PPV in an attempt to attract new investment.

There will be skeptics about what the WSOF was initially trying to sell with a possible 50-percent split of PPV revenues with fighters. Those fighters, in theory, would be spending more time carnival barking and less time training for fights. As WSOF moves forward with a renewed focus on making its platform with NBC stronger, the company needs a wider footprint before jumping to PPV. If there is one valuable lesson we have learned from the UFC’s relationship with Fox Sports, it’s that the television platform can make or break how many people are watching your events and will consider spending money on your product. Currently, World Series of Fighting is attracting approximately 200,000 viewers for its cable events. The approximate viewership baseline for both the UFC and Bellator on cable is around 675,000. It will certainly be challenging for World Series of Fighting to draw on PPV if it makes the eventual jump. It may have no choice.

Attracting money from investors in today’s marketplace is nowhere near as easy as it was, say, a decade ago when everyone and their mother wanted to invest in a business built entirely on hope after Stephan Bonnar and Forrest Griffin slugged it out for “The Ultimate Fighter” crown. Today’s MMA business has matured, and you can’t sell hope easily now. We are 20 years into this sector of combat sports. There’s actual data now for rich people to study and observe. The days of attracting fast money from financial backers who saw MMA as a way to recruit business contacts or increase celebrity status are over. There will always be the occasional financial backers who will throw away cash on a couple of one-offs, but they don’t last long in the business. Here today, gone tomorrow. Rich people get rich because they don’t like losing or spending a lot of money on their business affairs. The only tool that has consistently made money in the MMA space is PPV. Investors only see one path towards making money in MMA. It’s not cable television, syndication, broadcast television or Internet streaming. It’s only PPV.

After the recent UFC Fight Night event headlined by Mark Hunt-Roy Nelson at Saitama Super Arena, I was asked by several people whether or not a new boom period for MMA would be coming soon in the Japanese marketplace. My answer? It’s not going to happen anytime soon. Without fast money and without PPV as a viable option to generate revenue in the Japanese TV landscape, you’re not going to see big fights, other than those at an occasional Antonio Inoki event. The ingredients that made Japanese MMA such a large success are missing now. Television networks have been warned by politicians and law enforcement to steer clear of any questionable MMA investors. The professional wrestling companies that built stars with which organizations like Pride Fighting Championships made tens of millions of dollars are no longer in a position to be fighter factories. Unless you can attract someone like Masayoshi Son, founder and CEO of Softbank, to pour a few million bucks into generating MMA content for mobile and television platforms, it’s hard to see where the money is going to come from in Japan. One Fighting Championship has a better shot of attracting capital in the Chinese marketplace at this point.

In many respects, the current MMA business landscape is starting to resemble the one that exists in professional wrestling. The only difference is that World Wrestling Entertainment has temporarily abandoned PPV. The current players who have invested money in the MMA space are here to stay, but who knows for how long: the UFC and Fox, Bellator and Spike TV, the WSOF and NBC. Every decade, there seems to be a financial investor in the pro-wrestling landscape who throws around a lot of money in order to make a big splash but ends up losing his or her shirt in the process. We’re starting to reach that breaking point with MMA. If you think the pro-wrestling business is expensive, try promoting MMA events. If you can’t afford to succeed in the pro-wrestling space and build stars, you’re going to fail miserably in the MMA landscape. That’s how the business trends have historically played out in the American and Japanese marketplaces.

The only significant way MMA promoters and television networks will be able to increase their odds of attracting new capital is by reforming the current business model that the UFC has successfully established. Not enough fighters at the top of the talent pyramid, like Randy Couture or Georges St. Pierre, are willing to risk their careers in order to build the leverage needed to force change to current standard operating procedures. Reforms will only happen when promoters are forced to fight for their own survival. We may be reaching that breaking point sooner rather than later. Outside of the UFC’s current business setup, a new competitive model based on encouraging fighters to control their own financial destinies through revenue ownership would be a proactive step in the right direction.

The UFC will continue to make money regardless of the current business conditions. The other promoters must be creative and flexible in how they operate or else they will end up in the prolific graveyard of failed MMA promotions.