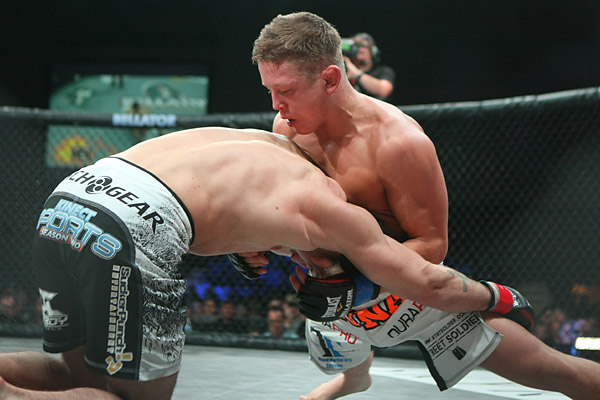 
The seasoned and well-traveled Chris Horodecki has worked as a professional mixed martial artist for just short of 10 years, fighting 28 times in 12 different organizations, including the International Fight League, TKO Major League MMA, World Extreme Cagefighting and Bellator MMA. However, he may be approaching the most significant moment of his career.

Horodecki will challenge Team Alpha Male’s Lance Palmer for the World Series of Fighting featherweight championship in the WSOF 21 headliner on Friday at the Edmonton Expo Centre in Edmonton, Alberta.

“This is a huge opportunity for me,” Horodecki told Sherdog.com. “I believe [earning a title shot after just one WSOF win] is a credit to my skill set and notoriety. I’ve been in the game for quite a while. Being Canadian and having the fight up here goes a long way. This is a huge opportunity, and I’m just very thankful for the chance I’ve been given; and I’m going to make the most of it.”

“I had a really good camp,” he said. “I just got back to London [late Saturday night]. I did part of my camp at Tristar in Montreal and trained there for five weeks to get ready. Everything’s on point. I’ve got no complaints or injuries. Everything is coming together for me.”

After starting his career at 155 pounds and emerging as a cornerstone of the now-defunct IFL promotion, Horodecki admits the move to featherweight has agreed with him. 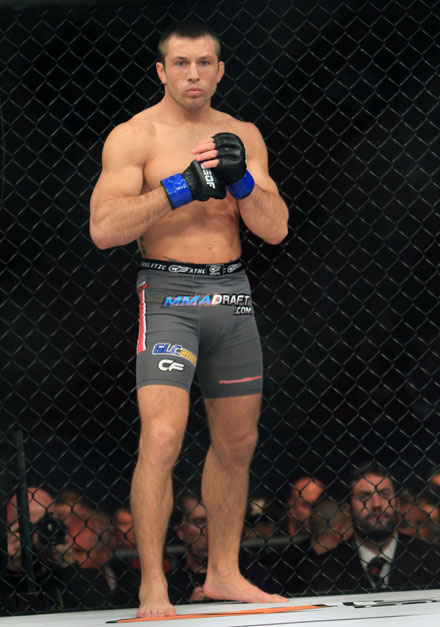 Photo: Jeff Sherwood/Sherdog.com
Palmer has won two straight.
“I’m feeling good at 145,” he said. “I’ve only been here my last six fights, as 155 used to be my main weight class; but back then, people weren’t cutting as much. Now, you have to do everything you can, because everybody is so competitive. If you can have a little more strength and size, it can be the difference between winning and losing. The diet and preparation are tougher at 145, but that’s the weight class that suits me very well and it’s where I need to be.”

Horodecki enters his showdown with Palmer having won three of his last four bouts. In his most recent outing in October, Horodecki used multiple takedowns, a strong top game and some ground-and-pound to earn a unanimous decision over Luis Huete at WSOF 14 in October. Going the distance to earn a victory was nothing new for the Shawn Tompkins disciple, as “The Polish Hammer” sports 10 decision wins among his 21 professional victories. Horodecki -- who withstood Tompkins’ stunning and untimely death at the age of 37 in 2011 -- plans to take advantage of the experience edge he has over Palmer, who will be putting his 145-pound title on the line for the first time.

“I definitely want to use my experience against him,” said Horodecki, who owns wins over Bart Palaszewski, Daniel Downes, Ed Ratcliff, Ryan Schultz and Ed West. “I’ve been in the main event and competed all over the world. I know what it’s like, so it doesn’t faze me to be fighting in Edmonton and in the main event. I’ve fought for championships and in main events, so I’m just ready to bring it.”

Horodecki’s resume speaks for itself, in terms of wins and losses. Only five fighters have beaten him in a career that dates back to June 2005: Schultz, Donald Cerrone, Anthony Njokuani, Mike Richman and former Pancrase champion Marlon Sandro. Horodecki figures to test the 27-year-old Palmer, who captured World Series of Fighting gold with his third-round rear-naked choke submission on Roufusport’s Rick Glenn in December. The California-based champion has followed the only setback of his career -- a third-round submission loss to Georgi Karakhanyan -- with back-to-back victories over Glenn and Nick LoBosco.

“He’s the champion for a reason,” Horodecki said. “He comes from a great camp in Team Alpha Male and that camp has some top fighters, especially in the lower weight class. His teammates are awesome. He’s got guys like [UFC bantamweight champion] T.J. Dillashaw, Joseph Benavidez and Urijah Faber there. I have a lot of respect for him. He’s done a lot, even though he’s still early in his career. He’s got a good team and a good skill set.”

Palmer was a four-time NCAA All-American wrestler at Ohio State University, and his base skill has served him well in his transition to MMA. All five of his finishes have resulted in submission, all by choke. Horodecki wants to remain upright for as long as possible, as he believes he has a healthy advantage in the standup department.

“I have to just not let him get off,” he said. “There’s no secret to what his game plan is. He and his teammates come from similar backgrounds. I just need to be first. I want to strike first and strike hard.”