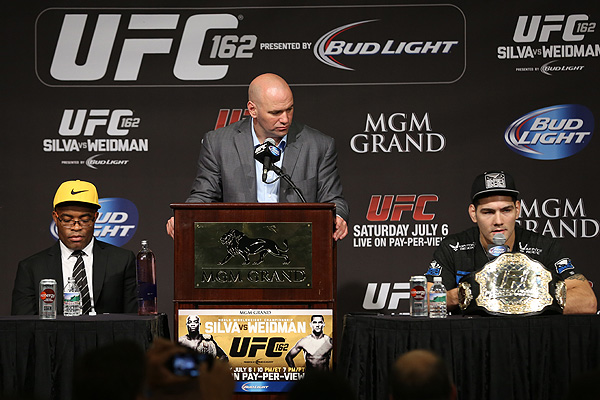 Anderson Silva seeks to avenge the only knockout loss of his career. | Photo: Dave Mandel/Sherdog.com


For one, the rematch represents a shot at validation. For the other, it serves an opportunity to enhance an already historic legacy.

Chris Weidman will defend his Ultimate Fighting Championship middleweight crown against former titleholder Anderson Silva in the UFC 168 main event on Saturday at the MGM Grand Garden Arena in Las Vegas. Weidman captured the 185-pound championship a little less than six months ago, when he ended the reign of “The Spider” with a stunning second-round knockout at UFC 162.

Sherdog.com touched base with a number of professional fighters and trainers to gauge their opinions on the UFC 168 headliner:

Johny Hendricks: I’m going with Anderson in this one. I think he will be coming back to make a statement with a TKO.

Robert Follis: I think Silva wins this one. I don’t see him taking this lightly like he did their last encounter. He wins by KO in round one or two.

Vinny Magalhaes: I believe that Weidman is too good at two things that might be Anderson’s weaknesses, which are wrestling and grappling. I believe that if he can take the fight to the ground, he wouldn’t probably miss the chance of finishing the fight there, like it happened in their first fight. I do believe that Anderson is the better striker. Maybe the KO in the first fight was a fluke, but judging the matchup as whole, I’d have to say that Weidman has more tools to win the fight again. With that being said, my pick is Weidman by submission.

Ed Herman: I’m going to go with Weidman again, this time with some ground-and-pound and a submission finish.

Travis Wiuff: I’m taking Weidman by dominating decision. It will look very similar to what Chael did to Anderson the first fight for four and a half rounds.

John Gunderson: I’m going with Anderson. I think he will come in with something to prove, and it should end violently.

Kyle Kingsbury: Weidman comes through with another upset via submission: “Fighter of the Year,” number one pound-for-pound, passing of the torch.

Nam Phan: “The Spider” wins. Although I’ll be rooting for Weidman, I think Silva has it this time.

Jeff Hougland: I already got my tickets for this one. It’s going to be a great night of fights. I like Weidman’s style better. I think he could beat Silva by submission, decision or KO, obviously. The only way I see Silva winning is by KO. I’m going with Weidman by TKO in the third round.

Bristol Marunde: We know Weidman is going to show up to fight; he has tremendous momentum and he’s undefeated. The question is what state of mind is Silva in? Once a fighter loses his motivation, he is all but finished. Looking at the long successful career of Anderson, I cannot deny his gift for combat and his desire to be the best; therefore, I must pick Anderson to defeat Weidman.

Chris Clements: I think Weidman gets the W. The only way I thought Anderson could’ve won last time was by acting crazy like he did and luring Weidman into his game. It was working until Anderson got caught, but I think Chris will have watched the fight and learned his lesson about striking with Anderson. I think this time Chris utilizes his wrestling game and controls all five rounds.

Igor Araujo: Silva wins by KO in the first or second round.

Mitch Clarke: I’m picking Weidman to keep the pressure on Silva throughout and win by decision.

J.J. Ambrose: The first fight was a shocker. Anderson went above and beyond his normal antics in the ring. He’s a great showman and often looks bored during his fights, as if opponents don’t have anything to offer him. Weidman showed him the error of his ways by knocking him out. I’m expecting an angry and very motivated Silva to win via TKO in the first or second round.

Zach Makovsky: Silva can do things that no one else can do. This ability is his most amazing quality. However, the bottom line is that Weidman possesses a skill set that matches up very well against Anderson. Silva is capable of beating anyone, but I think if they fought 10 times, Weidman wins the majority of them. I’ll take the champ by submission.

Mike Ciesnolevicz: Silva will come out and show why he is the second-best fighter of all-time behind Fedor Emelianenko. Even though Weidman won the first fight, I do not believe he is the better fighter. Anderson lost the first fight by being careless more than Weidman actually won. Don’t get me wrong, I think Weidman is top 5 middleweight, but I am predicting a more serious Anderson with something to prove this time around. I would be surprised if Weidman makes it out of the first round. Anderson wins by KO.

Gabe Ruediger: I got the last one wrong, but I think Anderson has got this one. In the last fight, Anderson had to play a lot for him to make that mistake. I think a motivated Anderson is a scary Anderson. Laser-guided Anderson wins in the second round.

Jason Dent: Who I want to win and who I think will win is definitely different here. My brains say Weidman while my heart is with Silva. I hope I end up being wrong, but I believe Chris’ wrestling and Brazilian jiu-jitsu skills will be too much for Anderson. When you couple Chris’ ground skills with his heavy hands and willingness to get right in your face, it makes him the worst possible matchup for Anderson. I believe Weidman will find a way to submit Anderson before the fight is over after Anderson gets frustrated by Chris’ takedowns and ground-and-pound. Again, I really hope to be wrong on this pick because I’m a really huge Silva fan.

Cameron Diffley: I see this fight going one of two ways: Anderson stops Weidman in the first or second round due to superior footwork and striking, or Weidman takes it by TKO or decision due to hard work if it goes past the second.

Ben Saunders: Weidman wins by submission or decision. Silva wins by KO or decision. Either way, this is the “Fight of the Year,” in my opinion.

T.J. Waldburger: Since Silva was knocked out, he should come into this fight much more serious; and Weidman will be confident but hopefully not overconfident. I can see Weidman taking this fight, as well, using more of his wrestling and ground-and-pound.

Tom DeBlass: Weidman wins by KO, again in round two.

Robert Drysdale: I’m a Weidman fan. I met him a few times and he’s a nice guy, and I’m one of the few that had my money on him when he first fought Anderson. I picked him because Anderson had the title for like five straight years, is a celebrity all over the place, has his money -- all these things. I think he was burned out and I could see a guy in his position kind of being tired of where he’s at. It had to get old having people all over you asking for autographs and all that stuff. Plus, he’s almost 39 years old and did everything he wanted to. Not taking anything away from Weidman or his win, but I think there was an element of self-boycott, and he was just like, “Go ahead and take my title. I’m through with this. I’m tired.” I don’t know ... I could be wrong. I’m not a sports psychologist by any means. If the motivated and focused Anderson shows up for the next match, he’s got a really good shot of beating him. He’d probably be the favorite to beat Weidman, but he’s got to really want it. If he comes back with that fire and really wants to win, I think he’s got a much better shot of beating Weidman. I think he’s really close to retiring and I don’t think he wants to go down with a loss. I think this is his signature fight, and I wouldn’t be surprised if he wins and then retires right after the fight.