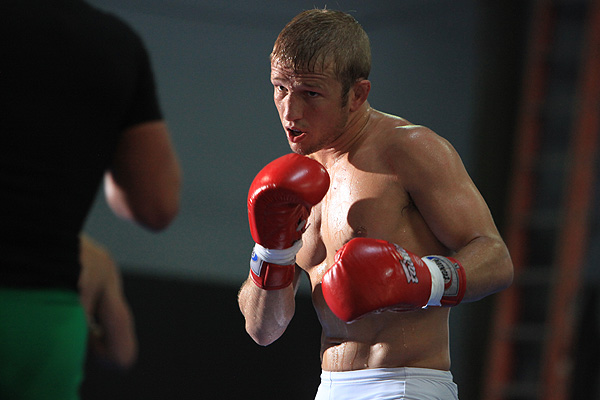 
Last week, we learned that Team Miller’s Roland Delorme had some sort of skin infection doing quite a number on one of his feet. Today, we begin with an update from Delorme, who whips off his sock to a housemate to reveal a foot that’s looking pretty good. If having a foot that looks like a succulent pig roasting on a spit is good, anyway. The thing looks like it’s been mopped with southern style barbeque sauce for 20 hours over some logs of fine mesquite.

While Roland prays for his meds to kick in, it’s time to bring a special guest to practice day for his teammates and first up for Team Miller is legendary trainer Rafael Cordeiro, formerly of Chute Boxe and now of Kings MMA. Cordeiro puts Miller’s team through the paces and wows the young men with his vast amounts of knowledge. Team Bisping responds by having Tito Ortiz come by to give some tips on how to throw an elbow so that it goes through someone’s face.

“To me, he’s the godfather of ground-and-pound,” says Hamid Corassani before we are treated to a montage of his teammates, staring slack-jawed with stars in their eyes having Ortiz standing in front of him.

Marcus Brimage wasn’t just impressed with his advice and remarks, “Wow he has a big f------ head.”

Bisping’s team hasn’t shaken off the bad feeling they got last week when T.J. Dillashaw opted to take the easier fight between Team Miller’s Roland Delorme and John Dodson. Since Dillashaw angled to face Delorme and skip the Dodson challenge, his teammates think he punked out. No one seems to understand that the easiest path is the best path when it comes to winning all reality shows. No one ever cares who got screwed or connived their way past week eight. It’s all about the finale.

His teammates Akira Corassani and Diego Brandao warn the wall-mounted camera that they plan to give Dillashaw a rough sparring session the next day, thereby teaching him a valuable lesson.

Sure enough, arm and kneebars from Brandao have T.J. howling in pain the following morning and after getting pummeled a few rounds by Akira, T.J.’s begging for some relief saying “Come on man” in exasperation. T.J. begins to get pissed and begins to hit back harder and harder. His anger carries over into his session with Marcus Brimage. Brimage doesn’t know the genesis of the problem but is aware that he’s inherited it.

“I’m a simple dude from Alabama,” says Brimage, giving premise to why he began to hit T.J. hard as well. “He starts chucking leather like that, what choice do I have to do than to start chucking leather back at your ass?”

T.J. finally has enough and screams in protest and the anger boils over until Bisping has to break up these two as they go nose-to-nose.

Bisping finds out later on that Akira and Co. were plotting all along to take T.J.’s head off. He calls that the wrong move and decides to have a chat with the chaps to sort things through. We’re a team for 19 more shooting days, fellas. Let’s keep it together, that sort of thing.

Team Miller gets a good surprise at their training session when Roland returns from the doctor’s office, freshly cleared for his fight. The meds have worked splendidly and his foot no longer resembles a swollen tick. He starts hitting the pads in preparation for his fight with Dillashaw.

He’ll need all the work he can get, with most of the TUF cast agreeing that T.J. is at the top of the class. One of his coaches, Tiki Ghosn, warns that T.J. is out to make a statement with a win over Roland.

Time for some product placement -- errrr, pranks -- between coaches that all seem to center around their vehicles. This time, Jason Miller claims to be a friend of the “working class” and orders a couple of cranes to come in and drop off highway caliber concrete barricades to surround Tiki’s Escalade. Miller tags them with the letter M, cackling as he leaves the scene and Tiki is left with nothing to do but stare. Mayhem adds “12/3/2011” as a reminder that on that day he will “punch Bisping in his face.”

Back to the fight prep, both T.J. and Roland make weight and then have their fight broken down by their peers.

“Roland’s so long and lanky, he might be able to catch T.J.,” says Josh Ferguson. “T.J.’s gonna beat on him for the most part but Roland’s got good hands, throws good straight punches and that’s the thing you got to do to beat T.J.” Nobody seems to doubt Dillashaw’s ability, least of all himself.

After the first round, most of his castmates probably were scared. T.J. never gives Roland a moment’s rest. Roland is on his back early and often with T.J. thumping punches all over him and using cranks to contort his long body into all sorts of hellish poses.

Roland survives the onslaught and across the cage, Bisping is telling T.J. that all they’ve learned about Roland during the previous five minutes is that “He’s a tough bastard and he took a beating.”

“Take him down,” Miller whispers to Roland over in their corner, just as they throw to a commercial leaving you with the thought that maybe just maybe Delorme was about to pull off the upset. Delorme ends that thought by getting up and walking over to Dillashaw, who promptly puts him down with the first punch of round two.

T.J. pounces on him and again delivers all sorts of blows and again wrenches his body in all sorts of awkward directions, eventually taking his back and choking him out for the win. Dana White calls it a “pretty one-sided fight” and his own coach Mayhem was a little tongue in cheek in his critique of the fight saying Roland, “didn’t get a feeling of where T.J.’s face was to punch.”

With all the initial requisite fights out of the way, it’s time to move towards the tournament of glory. Dana brings in his two coaches and then has each fighter come by to ask them who they’d prefer to fight next in the semi-finals.

T.J. says he wants “Vanilla Ice,” referring to Dustin Pague. It’s his hair, if you are wondering. Next up is John Dodson, who says he wants T.J. Dillashaw or he’d like to avenge the losses his flyweight friend Josh Ferguson by facing Johnny Bedford.

Dustin Neace says he wants to fight his teammate, Dodson, while Johnny Bedford comes by and wants Dodson as well.

“Let it be me,” says Bedford who wants to hand out some Texas justice. Miller explains to the audience that Dodson lost favor with his teammates, like Bedford, once they learned he had been ratting out their plans.

“Doesn’t sit well with the sheriff,” warns Miller who loves the matchup even though they are both members of his team. Bisping agrees with Miller, adding that it’s the only time he ever will.

Dennis Bermudez and Akira Corassani both want to fight each other, making that choice easy. Bryan Caraway steps in and makes his case for why he should fight Diego in the finals, since they are the two best fighters. Why not? Ducking the tougher fight worked fine for T.J. and it’s a move that Dana considers to be wise.

“I think that any guy in the 145-pound division should say they want anybody but Diego,” laughs White. The UFC boss then brings everyone in together and reads off the matchups.

T.J. Dillashaw will face Dustin Pague. T.J. says he wanted the match up because Pague has holes in his game and has no “steam behind his punches.” “Great fighter, great wrestler, pretty good-looking guy, too” is Pague’s kind response.

John Dodson, the most silly, fun-loving goofball on the show will tumble into some human barbed wire in Johnny Bedford, while Bermudez and Akira get their wish and are paired against each other.

Lastly, Bryan Caraway learns that he’ll be facing Diego Brandao after all. Sucks to be you, Caraway.

We’ve heard Caraway explain before that he battles issues that sent him to the couch of a sports psychologist and now he’s stuck fighting the one guy in the house that snarls in his sleep.

“I’m not scared of anybody,” says Caraway “but Diego came out there and finished Siler in one minute with a brutal knockout.”

Dana seems pretty sincere when he thanks the guys for such a great season of fights. You can tell he’s always happier when he has a group that wants to be there. Next week we’ll find out who really wants to be there as the semis begin.