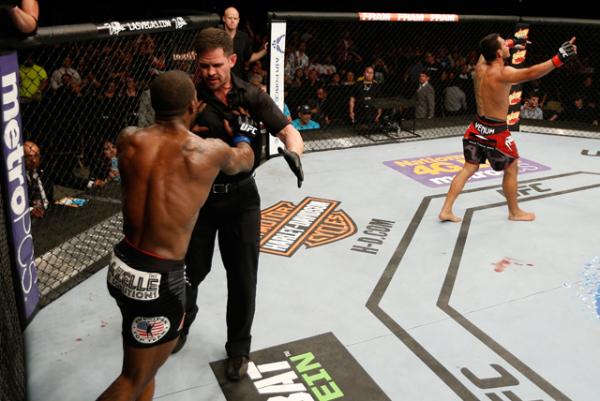 
It has been almost a week since the New Mexico Athletic Commission levied its yearlong suspension against Jason High, and I can’t stop wondering what in the world it was thinking when it took away a guy’s primary means of making a living for a year.

It also tacked on a $1,900 fine, or 10 percent of his $19,000 purse. Did I mention that the Ultimate Fighting Championship terminated his contract after his loss to Rafael dos Anjos at UFC Fight Night “Henderson vs. Khabilov” on June 7? It was a rough week for “The Kansas City Bandit” when you total up the carnage.

There have been a number of instances of referee pushes over the last decade plus. Either the NMAC didn’t care to see what kind of precedents had been set in the past, or it did and took it upon itself to kill the proverbial gnat with a cruise missile in an unnecessary escalation of punishment of a licensee.

Tito Ortiz famously shoved referee “Big” John McCarthy at then end of the first round of his UFC 47 bout with Chuck Liddell. If there was a punishment other than the ass-whipping “The Iceman” put on him in the first minute of the second round, I can’t find it.

Phil Baroni put his hands on referee Larry Landless just a few months prior at UFC 45. He was hit with a one-year suspension and a $5,000 fine from the Mohegan Sun commission. What differentiates Baroni’s actions from Ortiz’s and High’s is the fact that he threw a punch at Landless when he stopped his fight with Evan Tanner.

What would have happened had this been a Jon Jones or maybe a Cain Velasquez or perhaps a Chris Weidman? Does anyone in their right mind believe any of them would have been cut from the UFC or suspended for a year?

There is a happy medium that should have been found. A reasonable suspension and an even steeper fine would have done the job.

I know a lot of people may want to drop the hammer on a fighter who does something in the heat of the moment, but I say make sure the punishment you dish out for one guy is the same for the next.

I would imagine High and his team are looking forward to their appeal. It probably won’t do much good, but perhaps the NMAC will have a change of heart and reassess the punishment and adjust it to fit the crime a little more closely.

In another matter handled at last week’s NMAC meeting, the commission was quick to reaffirm the judging in the Diego Sanchez-Ross Pearson fight, also from June 7. Honestly, it was one of the crummier decisions I’ve seen in my 16 years of covering MMA, but I wasn’t shocked to see the NMAC back its judges. It is par for the course for just about every athletic commission.

Seeing Jeff Collins and Chris Tellez all square after turning in a couple putrid scorecards while High is sidelined for a year for his indiscretions is about as ass backwards as it gets from the regulatory side of the sport.


In more positive combat sport’s news: How about that Glory 17 event that went down at The Forum on Saturday in Inglewood, Calif.?

I have to say it was refreshing to see the upstart promotion deliver on its first ever pay-per-view effort. Now we’ll wait and see if anyone was coaxed into buying it after watching the Spike TV lead-in.

The show has been a bit schizophrenic numbers-wise since debuting on Spike last year. I know the promotion was hoping for a big number, but PPV is not the easiest of nuts to crack. Bellator MMA, the network’s MMA promotion, debuted in May with a buy rate north of 100,000, if you believe network president Kevin Kay. He claimed that very number last week in the conference call to introduce Scott Coker as Bjorn Rebney’s replacement in Bellator.

I’m sure the Glory folks would be euphoric if they pulled anywhere near half of that figure. We should get an idea of how they did in the next week or so.


After the June 18 announcement from Spike and Bellator about Rebney and the promotion he founded splitting ways, it was not surprising that just about all parties have gone radio-silent as the transition takes shape.

I ran into both Coker and Kay at Glory 17, and neither one had much to say. Other than the obvious fact that they are moving away from the tournament and season formats, there isn’t a whole lot leaking out at this point.

It wouldn’t be shocking if all the parties were signed to non-disclosure agreements surrounding the divorce. I reached out to Rebney, as well. Understandably, I have not heard back. It has to be a round time for the former boss after losing his baby. I’m sure we’ll hear how things went down soon enough, but for now, we’re all pretty much in the dark.

Greg Savage is the executive editor of Sherdog.com and can be reached by email or via Twitter @TheSavageTruth.