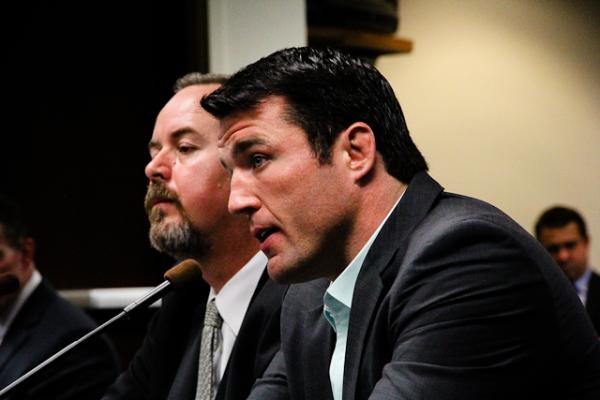 It was reported early Monday that the Nevada Athletic Commission had warned Chael Sonnen against competing in Saturday’s Metamoris 4 jiu-jitsu event or risk a steep fine for each of his recent drug test failures.

Most people know my stance on PEDs in combat sports, and if you don’t, well, let’s just say I’m not a big fan. Though I feel conflicted, I have come to the conclusion that this is a huge overreach by the NAC.

Right now, it seems Sonnen has a couple choices. He can go ahead with the match and hope the NAC is bluffing, a move akin to shoving all your chips with a middling hand at best. Or, he can muck his cards and ensure he won’t be sent to the rail with a big chunk of change left behind in the commission’s pocket.

I am not sure what Sonnen will do, but a pull-out would certainly leave Ralek Gracie and the rest of the Metamoris crew in a tight spot considering Sonnen has been one of the most publicized competitors on the card. Finding a suitable replacement could be a tough chore at this late hour.

While Sonnen’s decision is up in the air, a few of the facts of this saga are not. This fight was announced well before Sonnen went before the NAC last month. Grappling is not a competition that falls under any state athletic commission’s jurisdiction, most notably California or Nevada’s.

With that said, here are the reasons I think this is just a bad idea.

First off, the commissioners should have done their due diligence prior to July’s hearing -- you know, the one where some of them fawned all over old Chael P. and did just about everything but offer him a job.

Oops, my bad. They did offer him a chance to “help” the commission once again. Forgive me for shaking my head at this nonsense.

The NAC had their chance to let Sonnen know what he could and couldn’t do under the 2-year suspension they handed down just a couple weeks ago, and they failed to do it. His match with Andre Galvao was announced on June 19, more than a month before he faced the music on July 23. Perhaps we could have had less hand wringing and complimenting, and more explanation regarding what the 2-year ban precisely disallowed. Heck, I heard so much about how great a guy Chael was during that hearing, I was shocked to hear the commission was set to go after him so quickly after letting him wriggle off the hook with little more than a wrap on the knuckles.

Hmm, maybe I’m on to something. Perhaps this is not coming from a majority of the adoring Chael Sonnen Fan Club... err, Nevada Athletic Commission.

I am not shocked that someone at the NAC -- whoever it may be that is driving this decision -- might be a bit miffed that Sonnen was still planning on “fighting” a few weeks after being suspended. I can definitely see how a logical person might look at a grappling match that has been billed as a “fight” by its promoter and come to the conclusion that it is a violation of Sonnen’s suspension.

The only problem is that grappling, as far as I am aware, is not regulated by any athletic commission. California State Athletic Commission Executive Officer Andy Foster told me yesterday that he has no jurisdiction over the Metamoris event happening in his state this weekend. Competitors are not licensed, they are not drug tested and the commission does not provide any officials for the matches.

Also complicating matters, the NAC moved to license Vitor Belfort at the same July 23 hearing that saw Sonnen put out to pasture for at least 24 months. Belfort failed a random pre-licensure test administered by the NAC in February, but it seems they disregarded it because he was not a licensee at the time, which gives them little legal recourse.

That hasn’t stopped the NAC from going after Sonnen in this instance. He will not require a license to compete, it is not a regulated sport in Nevada or California, and there was nothing said about this already announced match during his disciplinary hearing.

In my best Johnny Cochran voice, “If the athletic commission has no say, NAC must walk away.”

In no way should anyone construe this as a show of support for Sonnen. I think anyone that cheats should have to pay for their transgressions. I do however believe that those sanctions should be clear, fair and transparent to all. That is not what is happening now.

While it is not an ideal situation, the NAC should back up, take a deep breath and walk away. They had their chance to make a point about Sonnen’s brazen lack of respect for them or their rules, and they chose to let him off easy. Now is not the time to make up for past failures.

Greg Savage is the Executive Editor of Sherdog.com and can be reached via @TheSavageTruth on Twitter.
« Previous Matt Hughes-Renzo Gracie, Galvao-‘Cyborg,’ Sperry-Liborio Official for ADCC 2015 Next With Metamoris Status Uncertain, Sonnen Contacted Randy Couture as Possible Fill-in »