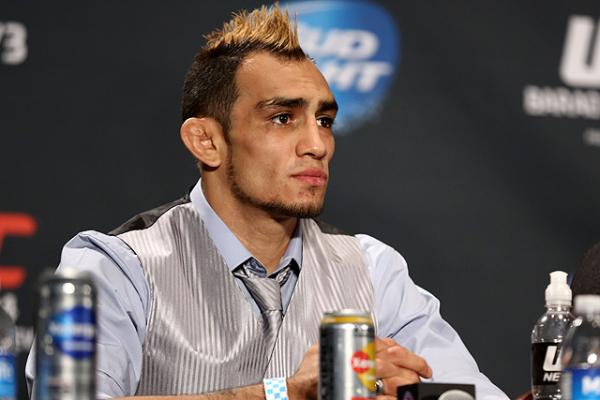 Tony Ferguson has won eight of his past nine bouts. | Photo: Dave Mandel/Sherdog.com


List the top lightweights in the world, and it might take a while to reach Tony Ferguson. That could soon change.

Ferguson will collide with Danny Castillo in the UFC 177 “Dillashaw vs. Barao 2” co-headliner on Saturday at the Sleep Train Arena in Sacramento, Calif. A victory there would move “The Ultimate Fighter” Season 13 winner to 6-1 inside the Ultimate Fighting Championship and allow him to advance further in the promotion’s 155-pound pecking order.

“I’m hungry,” Ferguson said on the “Countdown to UFC 177” program. “I just hope he’s training hard. From what everybody says, he sounds like he’s ready, and I’m ready, too. I think we deserve this spot. I know I deserve this spot in the co-main event. I put in my work.”

Ferguson, 30, will enter the cage on the heels of back-to-back first-round finishes against Mike Rio and former Deep champion Katsunori Kikuno, the former victimized by a brabo choke at UFC 166, the latter meeting his end via knockout at UFC 173. “El Cucuy” has delivered 13 of his 15 professional wins by knockout, technical knockout or submission, eight of them inside one round.

Castillo has rattled off three wins in four appearances, a controversial decision loss to former Ring of Combat champion Edson Barboza the lone misstep. The 35-year-old last fought at UFC 172 in April, when he knocked out AMA Fight Club’s Charlie Brenneman with a clean right hook at the Baltimore Arena in Baltimore. Castillo operates out of Team Alpha Male, where he has access to accomplished training partners like Urijah Faber and Chad Mendes. Ferguson believes such advantages only go so far. 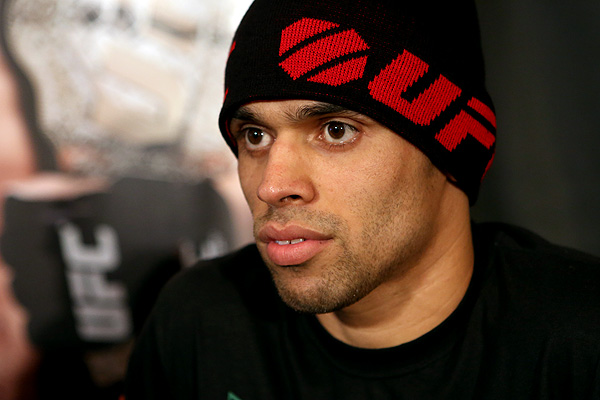 Photo: D. Mandel/Sherdog.com
Can Barao reclaim the title?
Renan Barao hopes to learn from his mistakes.

The 27-year-old Nova Uniao standout will look to reclaim the bantamweight championship he once held when he draws T.J. Dillashaw in a rematch atop the UFC 177 lineup. The Team Alpha Male export dethroned the heavily favored Barao in May, when he stopped him on fifth-round punches and snapped his 22-fight winning streak. The loss was Barao’s first in more than nine years and stunned an MMA world that had widely accepted him as one of the sport’s pound-for-pound best.

“A defeat is only a defeat when we don’t learn anything,” Barao said. “Nobody wants to lose. Nobody wants for that to happen, but it happened at that moment. I always slept with the belt by my side, and I think it changed a lot. I am missing the belt by my side. When I wake up to train, I think about the fight and the belt.”


UFC 177 “Dillashaw vs. Barao 2” will be the 288th event staged in Ultimate Fighting Championship history ... The seven women to whom Shayna Baszler has lost -- Alexis Davis, Sara McMann, Sarah Kaufman, Cristiane Justino, Tara LaRosa, Amanda Buckner and Kelly Kobold -- own a cumulative record of 103-22-2 ... Former Legacy Fighting Championship titleholder Carlos Diego Ferreira lists 2005 Abu Dhabi Combat Club Submission Wrestling World Championships gold medalist Ronaldo Souza as his hero ... When Yancy Medeiros steps into the cage, four years, two months and four days will have passed since his most recent victory -- a second-round knockout against Gareth Joseph under the Strikeforce banner in June 2010 ... Joe Soto is one of five men to have held the Tachi Palace Fights bantamweight championship. Cole Escovedo, Michael McDonald, Ulysses Gomez and Ian Loveland are the others ... Derek Brunson sports 14-, 41-, 48-, 52- and 67-second finishes on his resume ... When the unbeaten Cain Carrizosa was born on July 22, 1986, the top five films at the domestic box office were “Aliens,” “The Karate Kid Part II,” “Ruthless People,” “Top Gun” and “Back to School” ... Henry Cejudo defeated Bulgaria’s Radoslav Velikov, Georgia’s Besarion Gochashvili, Azerbaijan’s Namig Sevdimov and Japan’s Tomohiro Matsunaga to capture gold in freestyle wrestling at the 2008 Summer Olympics in Japan. At age 21, he was the youngest American wrestler ever to win a gold medal in the Olympics ... Ruan Potts, who holds the rank of black belt in judo and brown belt in Brazilian jiu-jitsu, trains out of Boksburg, South Africa, more than 10,000 miles away from the UFC 177 venue.