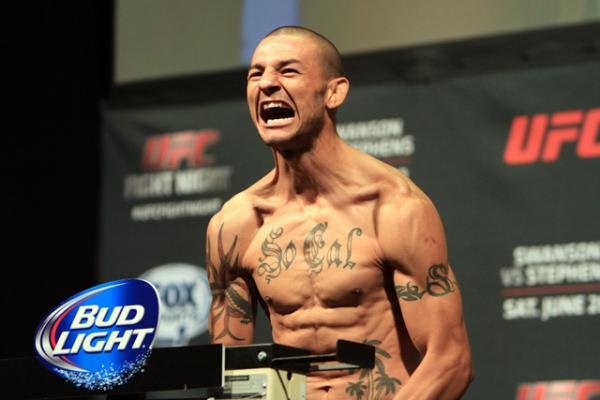 Cub Swanson has navigated some treacherous waters at 145 pounds, and now his destination is in sight.

Since falling to Jose Aldo in a 2009 World Extreme Cagefighting featherweight title eliminator, Swanson has racked up some impressive victories. His current six-fight winning streak includes stoppages of Ross Pearson and Dennis Siver. On June 28 in San Antonio, he added another solid name to his résumé with a unanimous decision over heavy-handed Jeremy Stephens in the main event of UFC Fight Night “Swanson vs. Stephens.”

While Swanson remains stuck behind fellow contender Ricardo Lamas in the rankings due to a 2011 submission loss, it appears the Jackson-Wink MMA product is next in line for a crack at UFC gold. Whether Swanson gets his long-desired rematch with Aldo or another bout with Chad Mendes will depend on the outcome of Aldo and Mendes’ championship showdown at UFC 176.

Lamas also competed in San Antonio, his first appearance since coming up short against Aldo in February. “The Bully” maintained his spot at No. 3 in the featherweight top 10 by eking out a narrow unanimous decision win against Aldo’s Nova Uniao teammate Hacran Dias.

In other action, Charles Oliveira picked up an impressive victory with a second-round anaconda choke submission of former Shooto champ Hatsu Hioki, launching “Charles do Bronx” into the ranks of featherweight contenders. Russian heavyweight Alexey Oleinik made the most of his UFC debut by neck cranking Anthony Hamilton into submission; “The Boa Constrictor” earned a spot in the list of heavyweight contenders, replacing sidelined veteran Antonio Rodrigo Nogueira.