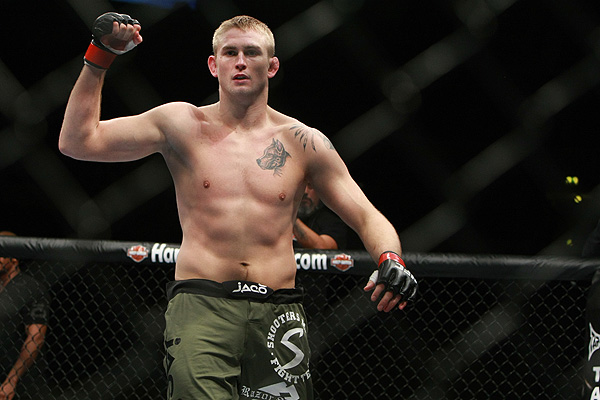 If you decided play the “Take a Shot Each Time Alexander Gustafsson is Compared to Jon Jones” game on Saturday, then it’s possible your recollection of the conclusion of the UFC on Fuel TV 2 main event is a little bit fuzzy.

The love affair with the 25-year-old Swede began early in his bout with Thiago Silva, when analyst Kenny Florian said that Gustafsson was fighting like Jon Jones -- only with more power. It continued on into the post-fight press conference, where one member of the media prefaced a questioning by referring to Gustafsson as a “white Jon Jones.” If it weren’t for all the UFC 145 promos during the broadcast, one might have thought that Jones-Gustafsson was already booked.

Gustafsson’s smooth dismissal of Silva in front of 15,000-plus countrymen at the Ericsson Globe Arena in Stockholm, Sweden, was undeniably impressive. Gustafsson scored a knockdown early and kept the Brazilian at bay for the remainder of the bout with crisp striking and sound movement. He never allowed the usually hyper-aggressive Silva to bully or intimidate him, nor did he appear to be fazed by the pressure of fighting in front of his hometown. And as the fight advanced into the third frame -- a first for “The Mauler” -- he continued to look fresh and confident.

“I tried to push as much as I could. Alexander’s a tough guy,” Silva said in a post-fight interview. “I couldn’t find the distance. He deserved the victory, what else can I say?”

When all was said and done, the precocious Swede had the signature victory of his career -- and it wasn’t really all that close. As Silva walked to his corner at the conclusion of the third round, Mike Goldberg couldn’t resist one more “Bones” reference: “That is a look of frustration similar to the looks the opponents of Jon Jones have had many times,” he gushed.

OK, enough already. Alexander Gustafsson is young, tall and talented, but he is not Jon Jones. The UFC light heavyweight champion has been a finisher from his first main event appearance against Brandon Vera at UFC Live 1 in 2010 until last December, when he choked Lyoto Machida unconscious in the UFC 140 headliner.

Gustafsson did what he was supposed to do against Silva, a man who had been out of action for more than a year and whose UFC victory list consists mostly of guys who are no longer with the promotion. In terms of how top contenders have fared against Silva, Gustafsson’s win falls somewhere between Machida’s first round blitz and Rashad Evans’ lukewarm decision triumph over the Brazilian. It deserves recognition as a quality win, but Gustafsson still has more work to do before he can be mentioned in the same breath as Jones. 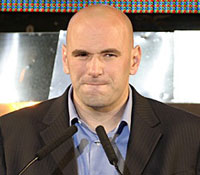 Dana White File Photo
Dana weighed in on Gustafsson.
The rush to anoint a new contender is understandable. Since the heydays of Chuck Liddell, Tito Ortiz and Randy Couture, light heavyweight has been regarded as one of the UFC’s marquee divisions, but half of its current Top 10 will have been vanquished by Jones if he takes care of business against Evans at UFC 145. That leaves Dan Henderson, Antonio Rogerio Nogueira, Phil Davis and Gustafsson as the remaining ranked challengers.

Henderson’s run through Strikeforce as well as his win over Mauricio Rua in November make him the odds-on favorite to become No. 1 contender, but after that, it’s difficult to rationalize Davis or Nogueira getting title shots without at least a couple more wins. That leaves Gustafsson, who, by the way, was handed the only loss of his MMA career by Davis.

Gustafsson has improved by leaps and bounds since then, but even he recognizes that he and Jones are not mirror images.

Jon Jones was recently on the cover of the UFC magazine, mimicking an underwater pose that boxing great Muhammed Ali made famous many years ago. While those types of comparisons might be a bit premature as well, that’s how high the bar is set when it comes to Jones. Putting Gustafsson in the cage with Jones in the near future would be throwing him to the proverbial wolves.

Outside of demonstrating true knockout power, Jones seems to have a firm grasp on how to utilize his considerable physical gifts. And according to coaches and teammates, his work ethic and understanding of the sport make him wise beyond his years. Gustafsson is a well-rounded competitor who knows how to utilize his length, but it isn’t hard to envision him being overwhelmed in a matchup with “Bones” at this point.

None of the above means that Gustafsson isn’t The Next Big Thing or that he won’t be deserving of a showdown with Jones in the future. He doesn’t need to be rushed, however. Perhaps by early 2013, Gustafsson will be ready for Jones, assuming both men continue on their current paths. By then maybe Gustafsson will be allowed to have his own identity, instead of being forced into the mold of Jones.

“It’s a little early [for the comparisons to Jones],” UFC President Dana White said after the fight. “He looked great. I’ve been hearing rumblings in Vegas about him. He was in Vegas training, and I heard that people didn’t even want to spar with him. The kid is absolutely talented.”

Sometimes talent needs to be nurtured, and Gustafsson could be significantly tested against the likes of Ryan Bader, Davis or Nogueira. That type of matchmaking would align with Gustafsson’s thinking, although he is smart enough to know not to refuse a title shot if given the opportunity.

“I want to fight the top five guys in the world in my division, but if the UFC were to give me a title shot, I would be more than ready if that day comes,” Gustafsson said.

To use a basketball cross reference, let us examine the case of Vince Carter, who once brought jaw-dropping talent from the University of North Carolina to the NBA draft more than a decade ago. He has had a nice career, but he never lived up to lofty comparisons that were thrust upon him coming out of college. It just goes to show that simply being a Tar Heel with crazy hops doesn’t make you Michael Jordan.

Right now, Jon Jones is a lot closer to Jordan than anyone else in the light heavyweight division. That doesn’t mean Gustafsson is Carter. He could be a lot better. He just needs time to forge his own identity.