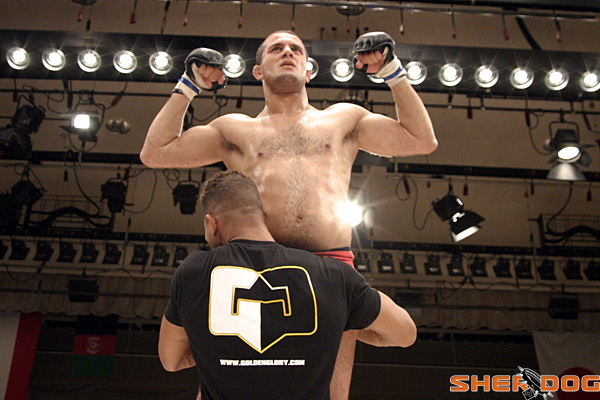 Siyar Bahadurzada is proud man in regard to his heritage.

The Afghan-born welterweight’s past is well-documented: Bahadurzada grew up surrounded by war in his homeland before he and his family moved to the Netherlands in 1999. On Saturday night, “Siyar the Great” earned the highest-profile win of his mixed martial arts career, stopping Paulo Thiago at UFC on Fuel TV 2.

Following his victory at the Ericsson Globe Arena in Stockholm, Bahadurzada revealed his hope of representing his native country in a positive way while competing as the UFC’s first Afghan-born talent.

“I fight for Afghanistan,” Bahadurzada (Pictured, file photo) told Fox Sports after his win. “When I have the flag on my shoulders, I don’t want to step on anybody’s toes with that. I just want to put Afghanistan in positive news headlines. That is my goal. That is what I want to do for my country.”

Bahadurzada’s victory came just 42 seconds into his inaugural UFC appearance. After a feeling out process, Thiago plowed forward, winging an overhand right at his foe. Bahadurzada deftly backpedaled and connected with a perfectly placed right hand to the Brazilian’s jaw, snapping his head around and causing him to fall unconscious to the mat, face-first.

“Those punches are knockout punches because people don’t expect them,” Bahadurzada said of the finish. “It’s not a hook or an uppercut. It’s in between. I don’t want to say [exactly] what it is, because then people will know the secret, but those are the punches that I throw a lot in training. Tonight, Thiago was just in the wrong place at the wrong time.”

Bahadurzada, 27, stated after the contest that he had injured his hand in training 10 days before the bout, possibly breaking it. Nevertheless, he threw his wounded appendage without hesitation, instantaneously turning out the lights on his highly regarded foe.

“I expected Thiago to [rush forward] like that with his head down. The only thing that I see when I fight is my target. I want to take him out as soon as possible. I don’t see or hear [anything else],” Bahadurzada told UFC.com. “This is the perfect start for me in the UFC. I see Paulo Thiago as one of the top 10 [welterweights], and to knock out a top 10 guy so quick, that’s a great start.”

As for what is next for the heavy-handed Golden Glory representative, Bahadurzada is eager to reenter the cage to deliver another fan-friendly finish.

“I’m looking forward to my next fight. I could fight [next week at UFC 145],” said Bahadurzada. “There will be more knockouts like this. I promise you.”