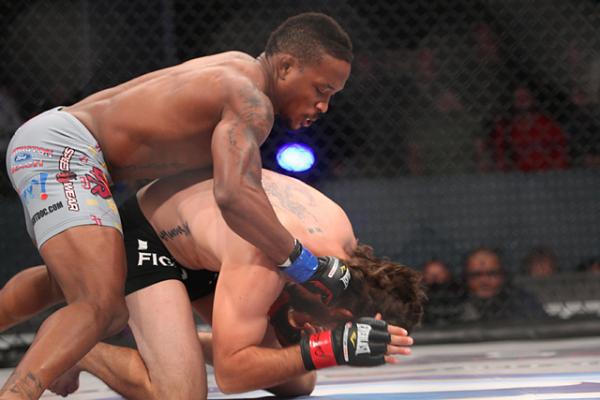 
Few things in MMA get the blood pumping like the potential graduation of a blue-chip prospect. Perhaps Bubba Jenkins has arrived at just such a staging ground.

Jenkins will battle former World Series of Fighting featherweight champion Georgi Karakhanyan in the Bellator 132 co-headliner on Friday at the Pechanga Resort and Casino in Temecula, Calif. A victory over the returning Karakhanyan, particularly a decisive one, could conceivably put the 26-year-old in position to challenge for Bellator MMA 145-pound title sometime in 2015.

A two-time NCAA All-American wrestler, Jenkins won a Division I national championship at Arizona State University in 2011. His exploits on the mat immediately placed him on the radar of every knowledgeable mixed martial arts fan. Jenkins won his first four fights, all of them finishes, before a shocking upset at the hands of LaRue Burley in September 2013. “The Highlight Kid” has since regrouped, rattling off four consecutive wins and re-establishing himself as a person of interest in Bellator’s deep featherweight division. Jenkins last appeared at Bellator 126 in September, when he took a three-round unanimous decision from Thiago Meller, snapping the Brazilian’s five-fight winning streak.

Karakhanyan has not fought inside the Bellator cage in nearly four years. The Millennia MMA standout won nine fights in a row after leaving the organization in 2011 -- a run of sustained success that culminated with his winning the WSOF featherweight crown in December 2013. Karakhanyan last competed at WSOF 10 in June, when he surrendered his title to Roufusport’s Rick Glenn in a second-round technical knockout. A Brazilian jiu-jitsu black belt, the “Insane” 29-year-old has secured 13 of his 23 career victories by submission.

With the Jenkins-Karakhanyan co-main event as one the primary drawing cards, here is what to watch for at Bellator 132:


Two of Bellator’s top featherweights will vie for the promotion’s biggest prize, as 145-pound champion Patricio Freire defends his crown in a headlining rematch with Daniel Straus.

Training out of he and his brothers team, Pitbull Brothers, in his native Brazil, Freire will carry a five-fight winning streak into the cage. The 27-year-old “Pitbull” ascended to the featherweight throne at Bellator 123 in September, when he took a five-round unanimous verdict over Pat Curran. Freire has delivered 16 of his 22 professional victories by knockout, technical knockout or submission, six of them inside one round. He has compiled a 10-2 mark in Bellator, split decision losses to Curran and Joe Warren the lone hiccups.

Straus has rattled off 19 wins in 21 outings. The American Top Team representative last appeared at Bellator 127 in October, when he dismissed Strikeforce veteran Justin Wilcox with punches in a cool 50 seconds. A grinder in every sense of the word, Straus counts victories against Curran, former Pancrase champion Marlon Sandro and Royce Gracie disciple Alvin Robinson among his 22 pro conquests. He owns a 9-2 record inside Bellator. 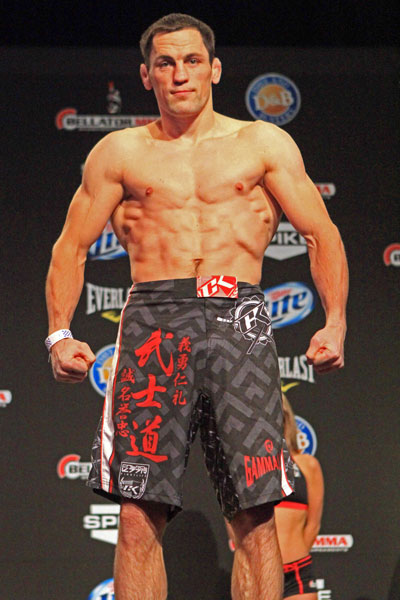 Photo: Jeff Sherwood/Sherdog.com
Zaromskis features head kicks.
Onetime Dream champion Marius Zaromskis has yet to make a serious dent in Bellator’s 170-pound weight class, as losses to Brent Weedman and Andrey Koreshkov have curbed some of the enthusiasm surrounding. Still, his long history of head-kick knockouts makes him a must-see attraction for the Viacom-fronted organization.

Zaromskis will confront journeyman Fernando Gonzalez in a welterweight showcase, as he seeks to string together consecutive victories for the first time in more than two years. The 34-year-old Lithuanian striker put the brakes on a two-fight losing streak at Bellator 119 in May, when he claimed a unanimous decision over Vaughn Anderson at the Casino Rama in Rama, Ontario. Zaromskis sports 13 knockouts on his resume, Jason High, Hayato Sakurai and Kazushi Sakuraba among his victims.

Gonzalez, 31, has posted back-to-back wins over Karo Parisyan and Karl Amoussou. He made his pro debut inside World Extreme Cagefighting all the way back in 2003.


Houston Alexander and Virgil Zwicker locked horns a little less than three months ago, their Bellator 129 encounter ending in a majority draw. An intentional head butt led to Alexander’s being deducted a point and resulted in a stalemate on the scorecards.

Now, the two light heavyweights meet again. Alexander, 42, rose to prominence inside the Ultimate Fighting Championship, where he scored a pair of violent knockouts against Keith Jardine and Alessio Sakara. “The Assassin” has gone just 8-9-1 since. Alexander signed with Bellator in 2013 and has sandwiched the draw with Zwicker and a loss to Vladimir Matyushenko around a second-round technical knockout against Matt Uhde.

Team Quest’s Zwicker has not recorded a victory since December 2013, when he felled Mike Hayes with a first-round punch under the KSW banner in Poland.


Derek Anderson showed plenty of promise in racing out to an 11-0 record, but a Bellator 117 submission defeat to Polish grappling ace Marcin Held slowed his rise.

The 24-year-old California-based lightweight will aim to rebound when he matches skills with Danny Navarro on the undercard. Anderson has shown a nose for the finish early in his career, having stopped six different opponents inside one round. A tall, rangy lightweight who stands 6-foot, he has gone the distance just once -- he scored a unanimous decision over the favored Patricky Freire at Bellator 98 -- since he turned professional in August 2011.

Navarro will enter his organizational debut with momentum to spare. The Millennia MMA export has torn through 12 straight opponents since starting his career 0-4.